Comedian-actor Kapil Sharma on Tuesday announced his new collaboration with Netflix with a hilarious teaser, which left his fans in splits. But, his detractors were quick to attack him for allowing The Kapil Sharma Show platform, produced by Salman Khan, to be used for the mocking of Arnab Goswami last year. 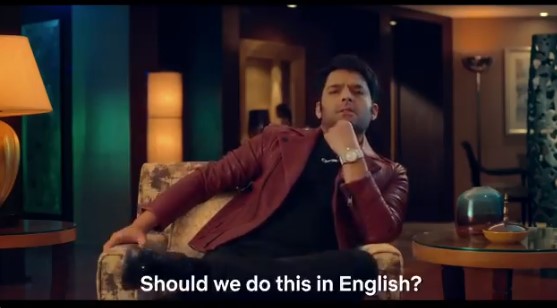 Sharing the teaser of his upcoming Netflix web series, Kapil wrote, “Don’t believe the rumours guys, only believe me. I’m coming on @NetflixIndia soon. This is the auspicious news.”

In the Netflix teaser, Kapil could be seen recording a promo for Netflix but he got stuck at the correct pronunciation of the word’ auspicious.’ He was seen saying, “Hi, I am Kapil and I have umm…one second. And this is an aus..pi…species. Aus-pi-cios.”

However, the famous comedian correctly pronounces the word ‘auspicious’ in the end as he says in fluent English, “So, I am coming on your TVs, laptops and phones. That is on Netflix. This was the auspicious news.” Buoyed by his ability to deliver his lines in English, Kapil ended the video by asking, “Should we do it in English only?”

Don’t believe the rumours guys, only believe me. I’m coming on @NetflixIndia soon ?? this is the auspicious news ? pic.twitter.com/wkdJgOXfrx

However, Arnab Goswami’s fans were not impressed as they began trolling Kapil for letting Kiku Sharda mock Goswami on his comedy show in the past.

Have you seen “Slim trim” #KapilSharma ever making fun of selmon,shah Rukh,akshay,amir Or ajay etc?.. No never but on the same handsome dude’s Show Arnab was mocked through an act which was originally an extremely sensitive discussion on SSR’s case. #CantSubdueArnab @republic pic.twitter.com/dCktcuGlV1

Don’t troll me now coz this guy deserves no respect#CantSubdueArnab#JusticeForSushantSinghRajput pic.twitter.com/hqZnWxWo3z

Kiku and Krushna Abhishek had famously recreated Goswami’s ‘Mujhe drugs do’ meltdown by asking ‘mujhe jug do.’ Many had felt that this was Salman Khan’s own way of responding to Goswami for the latter’s routine attack against the megastar. Salman is the producer of The Kapil Sharma Show.