The Delhi Police on Monday detained one minor student in connection with what’s been termed as #BoysLockerRoom chat controversy. The cops have also identified 22 other students, who were part of the Instagram chat group that routinely body-shamed girls, harassed them and planned to gang-rape them.

The Delhi Police arrested a 15-year-boy amidst a private school administration filing a complaint in Saket Police Station in South Delhi.

A cop was quoted by the Indian Express, “On Monday, we found out that the administration of a prominent private school had filed a complaint at Saket police station. In their complaint, school authorities requested police to investigate the incident. Police, using technical surveillance, got the registered number of the 15-year-old, who had allegedly shared a photograph on the group. His phone was switched off. After finding his address, he was apprehended on Monday evening.”

A case has been registered under section 465 (forgery), 471 (using forged document), 469 (Forgery for purpose of harming reputation), 509 (intending to insult the modesty of any woman) of the IPC and 67 and 67A of the Information Technology (IT) Act at the Cyber Cell of the Delhi police.

Incensed over the discovery, the Delhi Commission for Women had sent notices to Facebook-owned Instagram and the Delhi Police demanding the immediate arrest of all those part of the controversial chat group. Her notice read, “It is reported that the group is used for sharing objectionable pictures of minor girls and young women along with their personal information. The members of the group have been reported to have discussed techniques of raping women and gang-raping minors.” 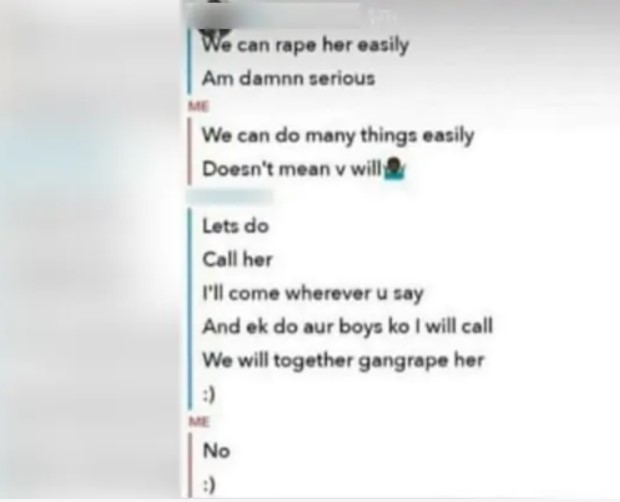 She added, “The commission has received several screenshots of the group wherein the handle names and the usernames are clearly visible. This is a very serious matter as an open media platform is being used for illegal activities.”

Screenshots of the ‘Bois Locker Room’ chat were leaked and had gone viral on social media triggering an unprecedented storm. The content of the chat is too vulgar in nature to be reproduced here. The boys in question were seen discussing girls’ private parts with an intention to gang-rape them.