One of the positive effects of the nationwide lockdown in India has been experienced by our nature as air pollution improved significantly. Not too long ago, several photos from Punjab emerged where villagers in Jalandhar could see the snow-capped mountains of Himachal Pradesh even from a distance of 200 kilometers. This, according to the locals, was possible only after 30 years. Now, another similar photo has surfaced from Bihar’s Sitamarhi district with the user claiming that she could see the majestic Mount Everest from her village. 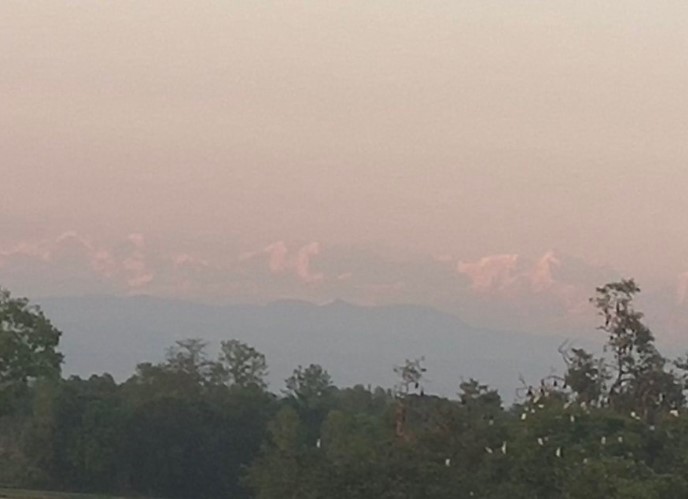 User Ritu Jaiswal shared the photo and wrote that she was a resident of Sinhwahini village in Sitamarhi district, which borders Nepal. “Nature is balancing itself,” she wrote adding that this was the first time people in her village were able to catch a glimpse of Mount Everest.

Another user from the same district shared a photo claiming to be of the great Himalayas as he wrote, “We are also able to see the Himalayan range from our Sitamarhi.”

Not too long ago, residents of Uttar Pradesh’s Saharanpur district had posted photos of snow-capped mountains of the Himalayas. Sharing a series of photos, an IFS officer had written, “Snow capped peaks of Himalaya are now visible from Saharnpur ! Lockdown and intermittent rains have significantly improved the AQI. These pictures were taken by Dushyant, an Income Tax inspector, from his house at Vasant Vihar colony on Monday evening.”

Snow capped peaks of Himalaya are now visible from Saharnpur !
Lockdown and intermittent rains have significantly improved the AQI. These pictures were taken by Dushyant, an Income Tax inspector, from his house at Vasant Vihar colony on Monday evening. #lockdowneffect #nature pic.twitter.com/1vFfJqr05J

With the nationwide lockdown to continue for some more time, more such spectacular scenes are likely to surface in the near future.