Reliance Foundation chairperson Nita Ambani has appeared on the cover of the Femina fashion magazine in a never-seen-before avatar. Going by the promotional video and photos shared by Femina, Mukesh Ambani’s wife has thrown a huge challenge to the other Ambani ladies such as daughter-in-law Shloka Mehta, daughter Isha and to-be bahu Radhika Merchant. 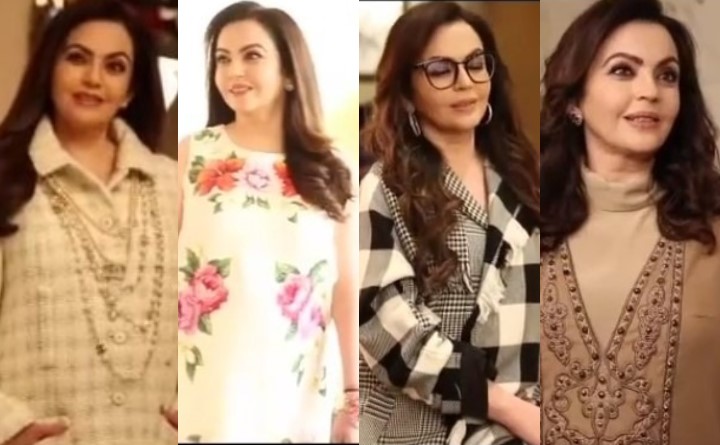 In the promo video of the photoshoot, Nita is seen flaunting her exquisite fashion sense as she poses for the camera in sleeveless a white floral midi dress, houndstooth print coat, and brown polo neck with long-sleeved embellished separates.

Speaking in the video, Nita Ambani said, “It’s been wonderful shooting for Femina again. This is my third cover. I’ve thoroughly enjoyed the experience. There is so much enthusiasm in this young team of Femina. I just wish Femina and Tanya all the best, and more power to all the girls here. Keep on doing what you’re doing and soar new heights in all that you do.”

In another post, Femina wrote, “The true epitome of elegance and grace Nita Ambani is the personality of Femina’s Power Issue. Nita Ambani Philanthropist, a champion of Women Rights and Cricket Aficionado is truly a power-packed icon on this month’s cover.”

The true epitome of elegance and grace Nita Ambani is the personality of Femina’s Power Issue. Nita Ambani Philanthropist, a champion of Women Rights and Cricket Aficionado is truly a power packed icon on this month's cover. @feminaindia

Her confidence during the photoshoot showed just far she’s come along even in the field of fashion. She did not appear to display any sense of nervousness. Even Shloka, Isha and Radhika would not have mustered so much confidence to be so eloquent in front of the camera. Like a boss lady, Nita has set yet another example for the next generation of Ambani women to emulate her.