BJP’s Bangalore South candidate Tejasvi Surya has sensationally managed to obtain an injunction against 49 media platforms after a woman accused him of being a ‘womaniser, abuser and wife beater’ on social media. A city court in Bangalore has passed an injunction against nearly 50 media platforms including Arnab Goswami’s Republic TV from publishing defamatory statements against Surya. 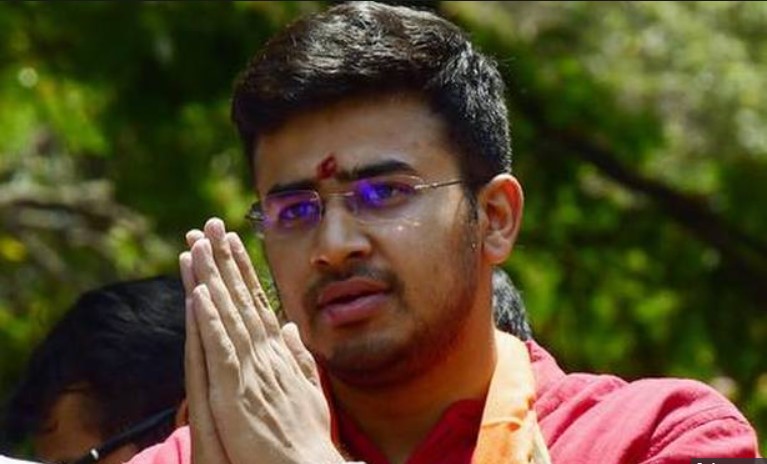 Among the outlets are Indian Express, Republic TV, India Today, ABP News, Times Now, CNN-News18 and many regional media outlets of Karnataka. Also included in the list are known social media platform such as Twitter, Facebook and Google. The injunction will remain in force until 27 May, when the matter will come up for further hearing. The Lok Sabha elections will have concluded by then after the scheduled counting for 23 May.

The BJP had surprised everyone by nominating him as its candidate from the prestigious Bangalore South by denying the wife of late Ananth Kumar a ticket from here. Kumar, who died last year of cancer, was a minister in the Centre’s Narendra Modi government after winning the 2014 elections.

Soon after Surya’s name was announced as the BJP candidate from Bangalore South, a woman, identified as Dr Som Dutta had accused Surya of being a ‘womaniser, abuser and wife beater’ during her social media conversations with a known Hindutva troll Shefali Vaidya. She had written, “Dear Shefali ji, I request you to not blindly promote Tejasvi without knowing his full truth. Do you actually want a womaniser, abuser and wife beater to lead us? Need proof. I will share. Not every Hindu is Dharmic and great speeches don’t make a great man.”

The Karnataka Congress had moved in with lightning speed to launch a blistering attack on Surya and the BJP. Its tweet had read, “Is @Tejasvi_Surya another MJ Akbar in the making? Dear @BJP4India , @Tejasvi_Surya seems to be a great choice. #BangaloreSouth will remember.
#MeToo #LokSabhaPolls2019.”

Is @Tejasvi_Surya another MJ Akbar in the making?

The court, according to the Bar and Bench website, said in its order, “…the same is made public it may bring him serious disrepute before the public at large and shall have a negative impact about him the minds of right thinking people. If such a malicious attempt at bringing in disrepute is not stopped, it will not only harm the reputation of the Plaintiff but also tarnish his positive image built over years by him.”

Surya’s lawyers have sent a notice to the publications – including Times of India, Indian Express, Deccan Herald, and The Hindu, as well as WhatsApp, Facebook, and Google – urging them to comply with the Court’s order.