A team of doctors from All India Institute of Medical Sciences, popularly known as AIIMS, has reportedly ruled out the murder theory in the tragic death of Bollywood actor Sushant Singh Rajput. The newsbreak by NDTV has sharply contradicted the claims made by Arnab Goswami and pro-BJP actress Kangana Ranaut as both of them had declared Sushant’s death as murder. Goswami had launched a tirade against Salman Khan with the ‘Bigg Boss of drugs’ jibe and questioned his silence on the matter. 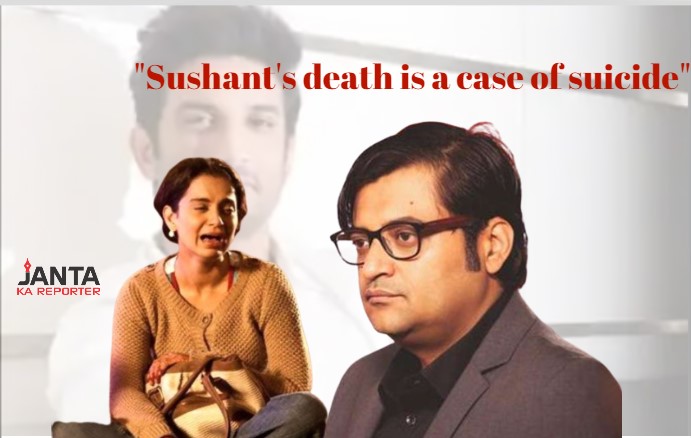 Quoting sources, NDTV reported that the team of AIIMS doctors had ruled out the theories of poisoning and strangling floated by the actor’s family and their lawyer. The report added that the AIIMS panel had submitted its report to the CBI and closed the file.

“Sushant’s death is a case of suicide. Murder completely ruled out,” Dr Sudhir Gupta was quoted by India Today.

The revelation on the AIIMS panel ruling out the murder angle has come as a huge setback to Kangana and Goswami as both of them ran a sustained campaign to prove that Sushant was murdered.

Last month, Goswami had said on his Republic TV show, “We have the details of the AIIMS forensic report for you tonight and one thing is clear as we keep you ahead on this story. There are a million lapses in the Mumbai Police investigation that has now been proven. It’s now been proven that elementary details were not followed,”

Goswami had then moved on to claim that the CBI was close to invoking Section 302 of the IPC, implying that Sushant Singh Rajput was murdered. Goswami thundered last month, “..The CBI is now close to filing 302 case. 302 ladies and gentlemen, 302 for murder.”

Kangana too has fervently claimed that Sushant’s death was a case of a planned murder. She had even tweeted, “I am more than willing to help @narcoticsbureau but I need protection from the centre government, I have not only risked my career but also my life, it is quiet evident Sushanth knew some dirty secrets that’s why he has been killed.”

In a video blog, Kangana had said, “In his last interviews, he (Sushant) is clearly asking why is the industry not accepting him. He felt like a leftover. Do you feel that this does not hold importance in this incident (his demise),” she asked. “This was not a suicide but a planned murder. The only mistake that Sushant made was to succumb to their planning.”

As expected, netizens took to social media to mock Goswami and Kangana.

Kangna Ranaut and Arnab Goswami after hearing this pic.twitter.com/2T1fvJ2hRw

Please hold your horses. AIIMS may have said SSR’s death was by suic!de and not murder. But CBI hasn’t yet issued a statement on it. They’re waiting for approval of forensic expert Dr. Arnab Goswami.

After #AIIMS report ruled out murder of Shushant Singh Rajput,
Onus is on Kangana, Arnab and Navika to prove AIIMS Anti-National