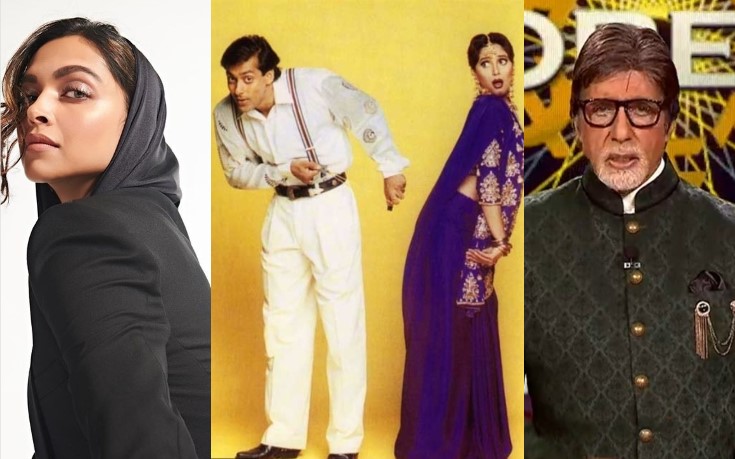 The question with a reference to Salman Khan’s film read, “What was the colour of the saree worn by Madhuri Dixit in the song ‘Didi Tera Devar Deewana’, which triggered a fashion trend in the country? The options were gree, red, yellow and purple. The contestant, who went on to become the first contestant of this season’s Kaun Banega Crorepati, correctly answered in favour of purple.

Another actor, who’s been at the centre of Arnab Goswami’s incessant attack, is Deepika Padukone. Her name once again featured on an episode, which saw Nazia Naseem, occupy the hot seat. Bachchan asked a contestant to identify the song Kamli Kamli before answering correctly as to which actor was it filmed on. The options were Jacqueline Fernandez, Aishwarya Rai Bachchan and Deepika Padukone. The correct answer was Katrina Kaif.

Wednesday’s edition saw Bachchan welcome the new season’s first crorepati in Nazia Nasim. An internal communications manager at a multi-national firm in Delhi, Nasim hails from Ranchi in Jharkhand. Bachchan was full of praise for Nasim, who did not use any of her lifelines until she won Rs. 6.4 lakh on the show. Another remarkable aspect of her was that she had one lifeline intact until she reached the Rs. 1 crore question.

The question for Rs. 1 crore read, “Which of these actresses once won a National Film Award for Best Female Playback Singer?” The contestant appeared hesitant for a few minutes until she made up her mind in favour of Roopa Ganguly.

Deepika’s name featuring on the KBC and Bachchan asking a question on Salman’s film assume significance in light of Goswami launching routine attacks against them in connection with the death of Sushant Singh Rajput. Arnab Goswami had a public meltdown against the Padmaavat star on his TV channel during the coverage of the drug racket case. Goswami had mocked Deepika Padukone by quoting the content of her deposition before the Narcotics Control Bureau.