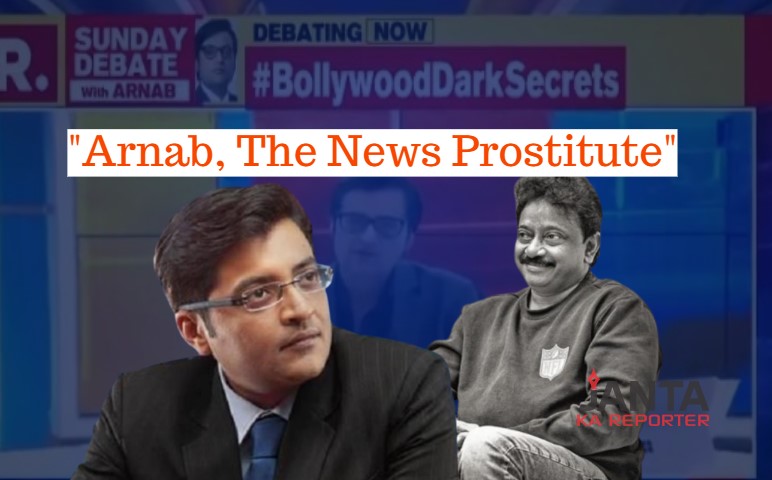 Taking a dim view of Goswami’s relentless coverage on the unnatural death of Sushant Singh Rajput, Varma urged Bollywood big names such as Salman Khan, Shah Rukh Khan and filmmakers Aditya Chopra and Karan Johar to break their silence and stop Goswami from portraying Bollywood in a poor light. Varma was incensed by Goswami’s recent on-air meltdown where he sought to expose the ‘criminal side’ of Bollywood.

In his diatribe, Goswami had said, “Beyond the smokescreen of glitter, glitz and glamour, there is a more devious and dark side, a criminal side…Cosy friendship with the underworld dons or the continued and relentless sexual exploitations of talented young girls and boys with their casting couches.”

This did not go down well with Varma, who took to Twitter to take on Goswami as he wrote, “Was shocked to see #ArnabGoswami talking about Bollywood in such a horrible way ..He calls it the dirtiest industry ever with criminal connections ,it’s full of Rapists, gangsters, sexual exploiters and what not?” 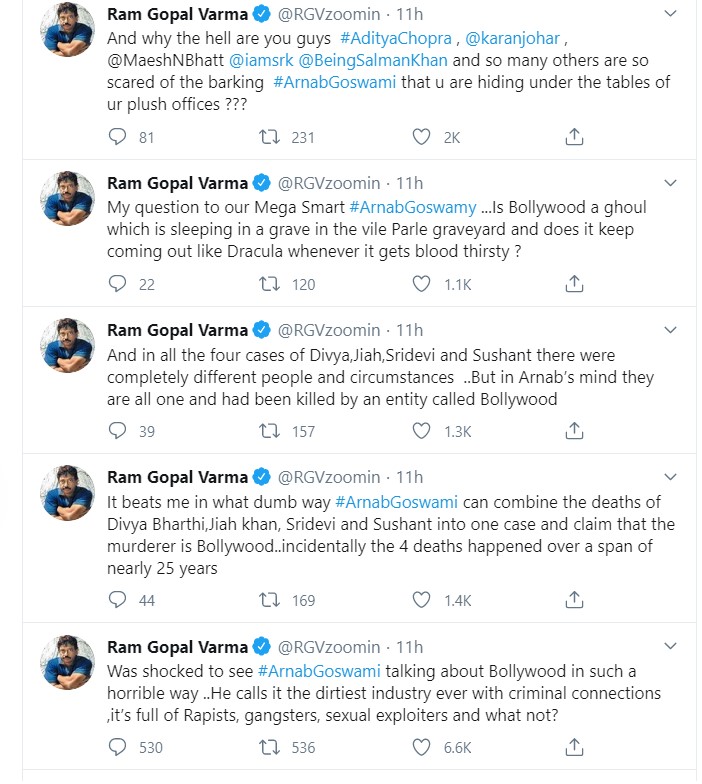 Varma continued, “It beats me in what dumb way #ArnabGoswami can combine the deaths of Divya Bharthi,Jiah khan, Sridevi and Sushant into one case and claim that the murderer is Bollywood..incidentally the 4 deaths happened over a span of nearly 25 years. And in all the four cases of Divya,Jiah,Sridevi and Sushant there were completely different people and circumstances ..But in Arnab’s mind they are all one and had been killed by an entity called Bollywood.”

Varma also questioned the silence of big Bollywood names such as Salman Khan, Shah Rukh Khan, Mahesh Bhatt, Aditya Chopra of Yash Raj Films and Karan Johar. He wrote, “And why the hell are you guys #AdityaChopra, @karanjohar, @MaeshNBhatt, @iamsrk @BeingSalmanKhan
and so many others are so scared of the barking #ArnabGoswami that u are hiding under the tables of ur plush offices???”

Varma said that he had decided to take on Goswami by exposing him through a film. He wrote, “I for one am feeling very strongly about this and I decided to make a film on #ArnabGoswami in which I will take the clothes off his facade and make him naked exposing the lengths and breadths of all his vital corrupt stats.”

The Bollywood filmmaker said that his next film to expose Goswami will be called ‘Arnab, The News Prostitute.’ “My film on him is titled
“ARNAB” THE NEWS PROSTITUTE. After extensively studying him I mulled on whether the tagline should be The News Pimp or The News Prostitute though both are relevant I finally settled on prostitute for its sound.”

My film on him is titled

“ARNAB”
THE NEWS PROSTITUTE
After extensively studying him I mulled on whether the tagline should be The News Pimp or The News Prostitute though both are relevant I finally settled on prostitute for its sound.

Varma is not the only Bollywood personality to slam Goswami for his perceived shenanigans. The Republic TV founder had faced plenty of condemnation from FIR actress Kavita Kaushik and Saif Ali Khan’s co-star Kubbra Sait after he was accused of using his TV broadcasts to incite communal tension in the country.