Republic TV founder Arnab Goswami on Monday claimed that he had accessed what he described as ‘Teesta Files’ hours after the activist was arrested by the Gujarat Police. Also joining Goswami’s debate was an international journalist François Gautier, who sensationally declared that he too would kill people if his wife was burned in a train just like those killed in Godhra in 2002. 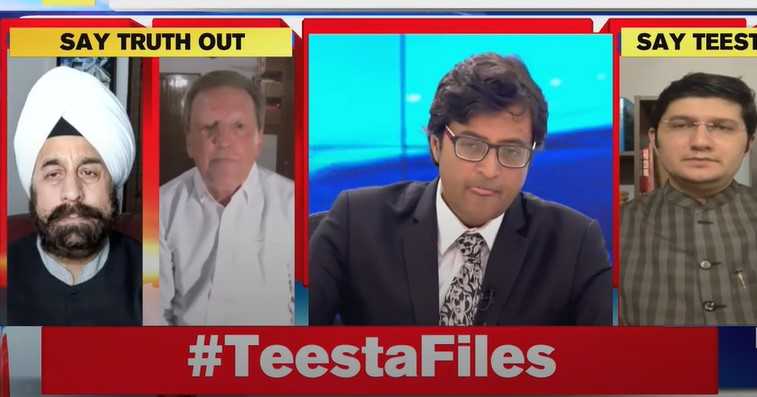 Launching his TV debate, Goswami said, “Ladies and gentlemen, after the Supreme Court’s verdict opened a can of worms about the tutoring, the falsehood, the lies, tutoring of witnesses in the Gujarat riots case, we here at Republic TV have accessed the entire Teesta Files.”

Goswami continued saying the ‘Teesta Files’ accessed by him indicated a ‘bigger conspiracy’ against Prime Minister Narendra Modi, who was the chief minister of Gujarat in 2002.

One of his guests was a BJP functionary Rais Pathan, who said he had worked with Teesta Setalvad. Pathan said that Setalvad received a lot of funding from Congress leaders and people living abroad. Pathan said that on one occasion late Congress leader Ahmed Patel had once promised Setalvad that the funding will not be an issue for her to pursue cases against the BJP government.

Also Read: Who Is Teesta Setalvad? What Did Supreme Court Say About Her? Husband, Children, Net Worth

“This is the most horrendous fraud,” said Goswami saying that Setalvad was a useful tool for the Congress to target Narendra Modi.

Speaking on the topic,Gautier said, “Western media had stuck itself at the image of Mr. Modi as the murderer. I was one of those rare journalists who actually said that 57 Hindus were burned to death like animals.

He added, “If my wife had been in that wagon and burned like an animal, I would also kill people. This is human.”

Gautier, who previously worked in India as the South Asian correspondent for many French-language dailies, is very popular amongst India’s Hindu right-wing supporters.