Punished for hate speech, Arnab Goswami is facing widespread public ridicule for apologising 280 times to British media watchdog as Ofcom imposed a fine of Rs 20 lakh on the Republic TV founder. The controversial TV anchor is now being compared with Hindutva icon Savarkar, who had secured his release from jail by issuing multiple apologies to the British government during India’s freedom struggle. 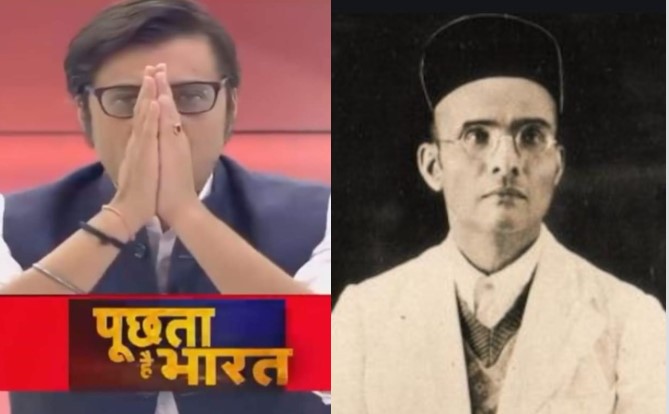 Goswami became a topic of intense social media discussions after the British media watchdog Ofcom ruled that Republic Bharat had indulged in spreading hate during a TV broadcast in September last year. While imposing a fine of Rs. 20 lakh on Republic TV, the media regulator informed that the Goswami-owned channel had issued an apology 280 times for the breach of media guidelines.

It said, “The Licensee also informed Ofcom that it broadcast an apology to “redress the breaches” and “convey our regret to all our viewers”. It said that the apology was broadcast a total of 280 times between 26 February 2020 and 9 April 2020, at all hours of the day.”

The apology broadcast by Goswami’s TV channel, according to Ofcom, read, “The communications regulator, the Office of Communications, post-viewing the September 6, 2019 episode of Poochta Hai Bharat, found that some offensive words were used in a program which may have disturbed the viewers. Republic Media Network apologizes if those words hurt any religion or particular person.”

Here’s how Twitterati reacted to the revelation on Goswami’s apology.

It’s amusing that even as #ArnabGoswami quietly apologised 280 times, at all hrs of the day and night, for spreading his vile bile, as instructed by the UK regulator, propagandists & trolls are spinning his surrender as a great act of patriotism & defiance by their hero! pic.twitter.com/spcjTtoiXv

British media watchdog Ofcom slapped a fine of £20,000 (equivalent to approximately Rs. 20 lakh) against Arnab Goswami’s Republic Bharat for promoting hate speech. In an extraordinary ruling, the Ofcom warned Republic Bharat to not repeat the same mistake in future.

The British watchdog had said that ‘having considered the written representations made to us, Ofcom’s Decision is that the appropriate sanction is to: i. impose a financial penalty of £20,000; ii. direct the Licensee to broadcast a statement of Ofcom’s findings on a date and in a form to be determined by Ofcom; and iii. direct the Licensee not to repeat the programme.”