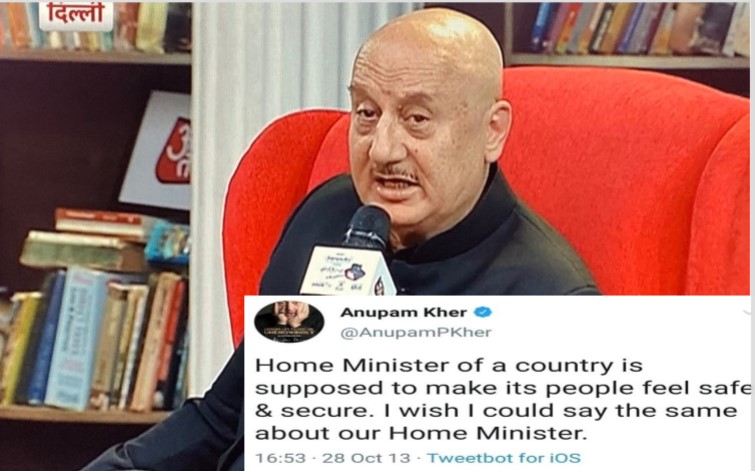 Delhi Police personnel surrounding their own headquarters questioning the leadership of their bosses was unprecedented. What made the matter worse was another protest held by some of their relatives near India gate even as some police personnel threatened to march towards the home ministry.

While India witnessed these extraordinary protests staged by police personnel and their relatives, the opposition Congress questioned the whereabouts of Home Minister Amit Shah, who was conspicuous by his silence. Terming the development ‘a new low’ in the history of Delhi, Congress leader Randeep Singh Surjewala asked, “Where is Amit Shah?” Soon #WhereIsAmitShah became a top trend on Twitter.

As Twitterati began trending the hashtag #WhereIsAmitShah, some users dug out an old tweet of Kher poking fun at the then home minister in the Congress-led government in 2013. Kher had written, “Home Minister of a country is supposed to make its people feel safe & secure. I wish I could say the same about our Home Minister.”

Home Minister of a country is supposed to make its people feel safe & secure. I wish I could say the same about our Home Minister.

Soon, Kher began to face incessant trolling for his lack of consistency as users reminded him about the glaring irony of his tweet. Many pointed out why he had not questioned the competence of Amit Shah even as Delhi witnessed unprecedented developments. Noted journalist and filmmaker Pritish Nandy wrote sarcastically in response to Kher’s tweet, “Now this is interesting. I am happy you have seen the light. Finally.”

Now this is interesting. I am happy you have seen the light. Finally.

Similar reactions followed from other users too for Kher, who’s become one of the most fierce flag-bearers of the BJP and its Hindutva agenda.

Dear @AmitShah please listen to what @AnupamPKher ji is saying. Please WAKE UP and protect the citizens of the country.#WhereIsAmitShah https://t.co/9b7pCvnmmm

I always try to convince my friends that he is real ACTOR. ? https://t.co/P7ayxplKFn

The latest round of trolling faced by Anupam Kher for his inconsistency is a lesson for celebrities to exercise caution when exhibiting biases to suit their personal agenda. In the age of digital footprint, this will always come to haunt them as Kher has been witnessing first-hand.