Amitab Bachchan-hosted quiz show, Kaun Banega Crorepati, on Wednesday night included a question on two actors namely Hrithik Roshan and Tiger Shroff, both of whom could be labelled as dynasts or the products of nepotism in Bollywood by some critics. While Arnab Goswami has been relentlessly targeting Bollywood for promoting nepotism and stifling talent, Kangana Ranaut had courted a full-blown controversy by claiming to be in a relationship with Hrithik. 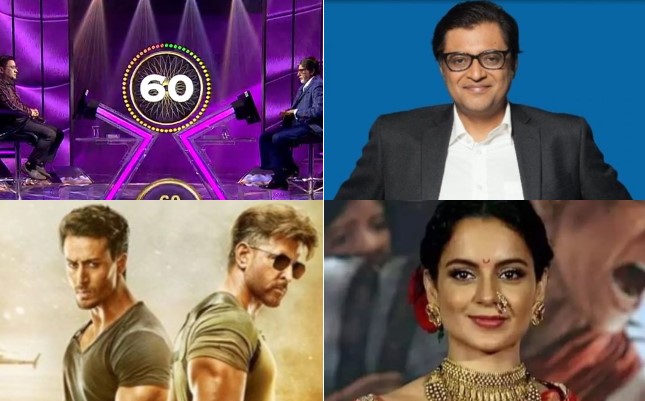 Bachchan informed all that the singers of the song were Vishal Dadlani and Benny Dayal, while the music was composed by the Vishal-Shekhar duo.

Both Tiger and Hrithik are sons of two established names in Bollywood. Tiger’s father Jacky Shroff is a veteran Bollywood actor, while Hrithik’s father Rakesh Roshan has been a renowned actor and filmmaker.

Goswami has been launching a tirade against nepotism in Bollywood while supporting the tirade launched by pro-BJP actress Kangana Ranaut. Hosting a debate on nepotism in Bollywood in July, Goswami had said, “Kangana has opened up a can of worms. A Bollywood lobby that no one spoke against is seeing voices speak up now…And it’s not about one actor…The rot, if you analyse it, it seems, runs much deeper. The malaise is much worse.”

Goswami had claimed that ‘if everything is to be believed is looming for all those, who come to Mumbai with limited dreams. Limited means but big dreams.’

Goswami’s on-air meltdown was in the context of Sushant Singh Rajput’s death, for which many had held the phenomenon of nepotism in Bollywood responsible since the late actor from Bihar was deemed an outsider.

Kangana, who claimed to have dated Hrithik in the past, had told Goswami in an interview that nepotism was quite prevelant in Bollywood. She had said, “Many governments have helped this Bollywood-drug mafia grow. These people promote nepotism, many of them do drugs from childhood and then become actors or directors. Many of these actors, I dated one of them — they go to a place, start with a drink & then go on with drugs. It all starts with a drink, then a roll, and then a pill, then they snort – it’s a secret sign. These actors, their wives move to houses & do drugs, debauchery is unimaginable. I’ve seen how vulgar it becomes and things get out of control at these drug parties.”

In the last eight episodes of the new season of the KBC, Bachchan has asked questions on Salman Khan, Aaditya Thackeray, Deepika Padukone, Shah Rukh Khan and Arjun Kapoor’s rumoured girlfriend Malaika Arora. Except Malaika, Goswami has been attacking all other stars in connection with the death of Sushant Singh Rajput.