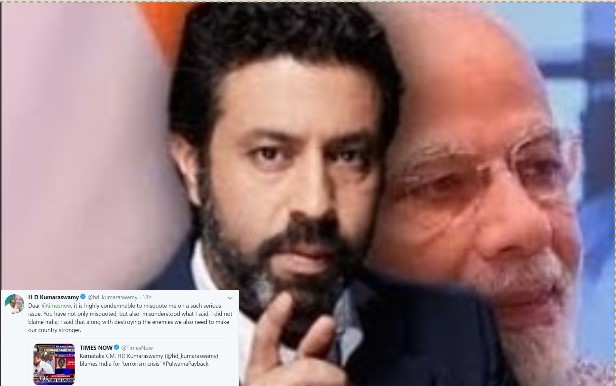 It also flashed headlines such as ‘HDK blames India for terrorism crisis’ and ‘Karnataka CM refuses to blame Pak’ during the live broadcast of Kumaraswamy’s video.

This evoked an angry reaction from Kumaraswamy, who chided Times Now for spreading misinformation by misquoting him. He tweeted, “Dear @timesnow, it is highly condemnable to misquote me on a such serious issue. You have not only misquoted, but also misunderstood what I said. I did not blame India; I said that along with destroying the enemies we also need to make our country stronger.”

Dear @timesnow, it is highly condemnable to misquote me on a such serious issue. You have not only misquoted, but also misunderstood what I said. I did not blame India; I said that along with destroying the enemies we also need to make our country stronger. https://t.co/7ocCHgw9An

Here’s what Kumaraswamy actually said in Kannada language. “The mastermind behind the killings have been exterminated. This should have been done earlier. The sorrow of the massacre of 40 of our jawans is overwhelming and whatever action we take we can come out of it. But we have to take precautionary measures to create an atmosphere of peace so that such incidents do not occur.

“It is the duty of the government to create such an atmosphere. Declaring them as terrorist nation is one part of it. But those terrorists from within our country also should reigned in by talks or law or by force. Then only, we can stop losses to the families of our jawans. This is not a matter of tit for tat only. But these acts by terrorists should also be stopped.”

Times Now and Republic TV have been in constant battle to outdo each other on the issue of nationalism. Critics have often slammed these two channels for never criticising the central government headed by Prime Minister Narendra Modi. Both channels have not raised any questions on the intelligence failure, that led to the deadliest terror attack on the Indian armed forces, killing 45 CRPF jawans this month. Instead, they have been seen questioning the opposition parties for not explicitly criticising Pakistan for its alleged role in the Pulwama terror attack.