ABP News had to face angry protests from supporters of Lalu Prasad Yadav after its anchor was accused of addressing the RJD chief disparagingly. The Hindi news channel was in Munger to hold a debate show on the ongoing Lok Sabha polls with local politicians and members of audience. However, things turned chaotic after RJD supporters reacted angrily to the channel’s anchor’s remarks, addressing Yadav as Lalua. 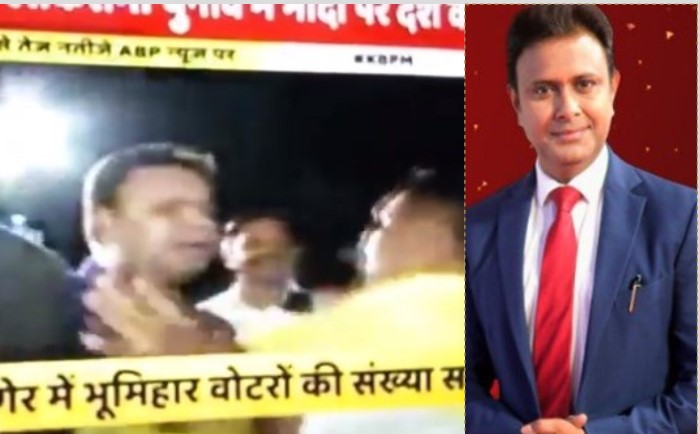 While speaking to an RJD guest, the channel’s anchor, Anurag Muskan, said, “See, they are clearly saying that earlier Bihar only had Lalua’s lantern and now electricity bulbs are also lit here.” While the the show’s guest representing the RJD presented his argument, a group of party supporters from the audience climbed the stage and snatched the anchor’s mic to demand an explanation from Muskan.

“Who did you address as Lalua?” asked one member of the audience with a menacing look on his face. Muskan sought to explain, “That was said affectionately.”

But this was not enough. The audience member in question walked towards the JDU guest asking if he had addressed Lalu Prasad Yadav as Lalua. Meanwhile, another RJD supporter was heard shouting, “You (ABP News anchor) are responsible for turning things ugly. Soon the situation turned chaotic and several RJD supporters surrounded the anchor with one of them heard saying, “This is an insult to our leader. No one dare address him as lalua. You call him Lalu Yadav.”

Feeling helpless, Muskan tried to pacify the angry RJD supporters, but to no avail. Unable to continue with his show amidst constant protests, he declared, “Don’t do this. Ok, then we will see you all in Samastipur on Monday. Thank you.”

The RJD reacted angrily and accused Muskan of being casteist. Its tweet read, “ABP journalist Anurag Muskan addressed Lalu ji as Lalua for no reasons. This reflected his casteist mentality. Journalistic ethos must be maintained. Journalism has touched a new low. The fight against the caste politics and underprivileged in society that Lalu Ji always fought, that fight still continues.” Reacting to the RJD’s official protest, Muskan expressed his regrets on addressing the RJD chief as Lalua.