Janta Ka Reporter 2.0
Home Blog “Choice was simple: Either sit at the protest today or prepare to...

It started one bleak December evening. The students of Jamia Millia Islamia University had been subjected to the worst brutality ever to visit a university campus in Delhi in recent years. not just students who had been protesting against the Citizenship Amendment act (CAA) but those studying in the university library or praying in the mosque were at the receiving end of police fury. The police, allegedly hurling the most communal of abuses at the students, used tear gas in the library, leaving hundreds suffocating. Tables and chairs were smashed, window panes reduced to shards, bones were broken—a student even lost his eye. There were visuals of blood on the prayer carpets in the mosque. 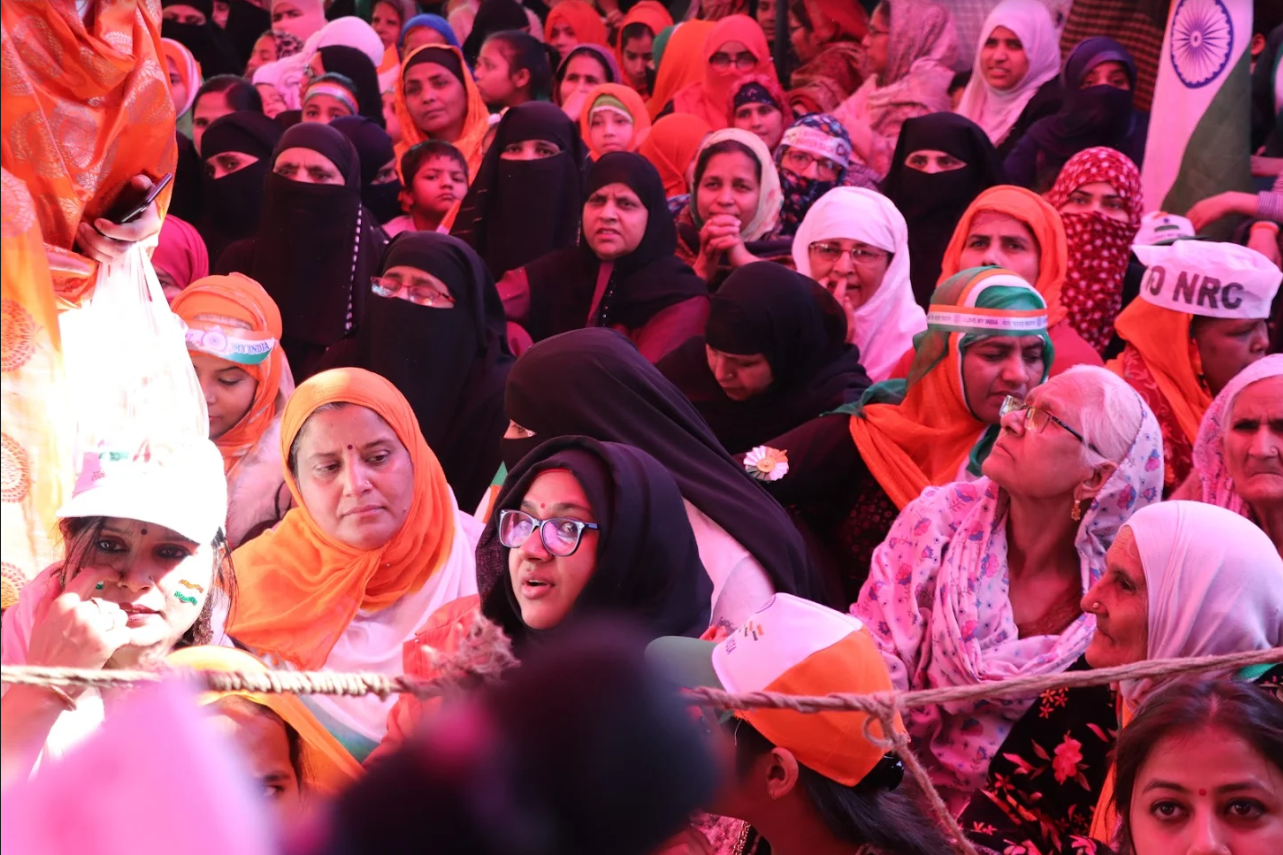 The most abiding image though was of four Jamia girls shielding a male student from the collective blows of police personnel who had dragged him out of the house by his collar. even as two girls physically shielded the guy from the blows of the policemen, two other girls looked the policemen in the eye, fearlessly, fiercely. The hijab-wearing girls flinched not a second, compelling the cops to retreat. The girls were later identified as Ayesha Renna and Ladeeda Sakhaloon; the guy whose life they saved was Shaheen—he escaped with a bleeding nose and a fractured arm.

The image summed up how the women were going to respond to any atrocity in the anti-CAA stir. It tore to pieces many an image of coy, speechless and powerless Muslim women. Even as images of blood in the mosque and a boy with a bandaged eye caused consternation among the locals, the stir spread to the most unimaginable of places—Shaheen Bagh. Beyond people in the vicinity, not many were aware of its whereabouts.

The largely working-class neighbourhood with its fair sprinkling of the wealthy and well educated was to soon become the epicentre of the struggle against the CAA, National Register of Citizens (NRC), and a bit later, the National Population Register (NPR). Men and women, the young and the old, used Google Maps to find their way through to Shaheen Bagh. not just the Indian media and local politicians, the media across the world took note of a protest led by Muslim women taking on the Hindutva-espousing government.

As the temperature in India’s capital plunged on a recent evening, Rehana Khatun bundled her 29-day-old daughter in a fuzzy quilt and went out for her new nightly activity: participating in a sit-in against the government.

Khatun, 28, is a mother of three who rarely leaves her neighbourhood in southeast Delhi. She is one of a few hundred Muslim women—including grandmothers and children—who have occupied a stretch of road for a month, undeterred by rain, cold or threats, as a sign of opposition to a new law that excludes Muslim migrants from a fast track to citizenship. She sits cross-legged as she settles in for another night of speeches under bright blue and yellow tarps held up by narrow poles. ‘Our fight is for our Constitution, our country, our survival’, she said. The protest in the capital’s Shaheen Bagh neighbourhood has become an enduring symbol of the demonstrations that have swept India over the new law, which was passed in December. Most of the women are homemakers, many in hijabs, and their long-running vigil has been featured on prime-time news shows, inspired similar sit-ins and attracted solidarity from across India. On Sunday, the protest attracted its largest crowd yet, according to locals, as thousands of supporters packed the narrow lanes surrounding the area.

Against all odds, the resolute women of Shaheen Bagh gave the nation hope. Inspired by the intrepid girls in Jamia, the weather-beaten, wizened women of Shaheen Bagh took to the streets, concerned as they were for the safety of their grandchildren studying in the university. Most hailed from families that had either not allowed these women to study when they were young or could not afford to provide them education.

Now, in the autumn of their life, these women saw education as an opportunity for upward mobility in life. For years, they had emphasised good education for their children. When their children or grandchildren went to study in Jamia, they took pride in it. Also, there was unexpressed safety; they knew the youngsters had gone virtually next door.

The policemen on the rampage in the university on 15 December 2019 shattered many such innocent dreams. The Shaheen Bagh women could no longer keep quiet. They came out to sit in a dharna first on the evening of 15 December 2019. In less than a week, the spotlight shifted from Jamia, Jantar Mantar, Jama Masjid, India Gate, all-important protest sites in the struggle against CAA, to the hitherto little-known dirt-laden lanes of Shaheen Bagh.

To be in Shaheen Bagh was something else. It was magical; it was exhilarating. It was like watching the triumph of the human spirit, the victory of fortitude against adversity. Soon, it became a pilgrimage centre of secular India harping on the notions of a shared past. Muslim women were shortly joined by Hindu sisters; some came in from colonies like Lajpat Nagar and Sarita Vihar, others joined gradually from neighbouring cities like Chandigarh, Jaipur and Ghaziabad. A little later, a formidable Sikh contingent arrived as reinforcement. Then a delegation of Christian nuns came in, giving Shaheen Bagh the look of a miniature India. Some came from Kerala, some from Chhattisgarh, some from Punjab, and the women of Shaheen Bagh accommodated them all. And the protest began showing signs of a movement. 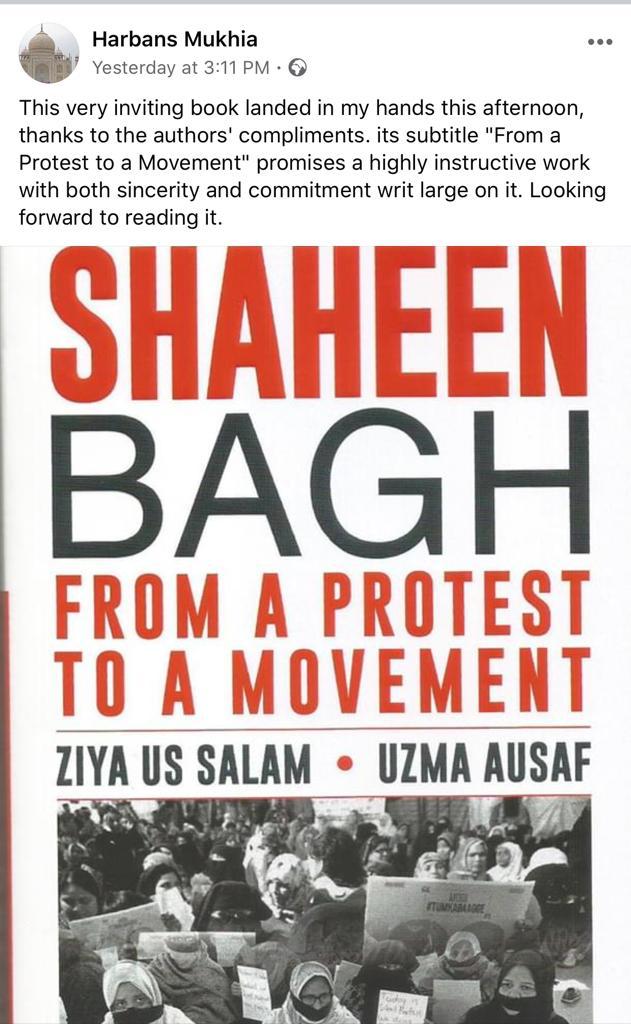 As brilliantly articulated by historian Romila Thapar, who visited Shaheen Bagh after the women had been sitting in protest for eight weeks came back with this impression:

Women are finding their voice through Shaheen Bagh. We know all the struggles that women have had to go through in this country over the past fifty years. One of the manifestations of the success of that struggle is Shaheen Bagh. The struggle is led by some Muslim women, the kind who are never in the limelight, never given any publicity, and who are dismissed as just housewives. They are asserting their personality, and airing an opinion that is important. It is all very, very impressive. Nobody would have thought such strong resistance to emanate from such a quarter. The unexpectedness of it all has only added to a feeling of exhilaration. At the same time, it is the subterranean self that people do not express regularly but when they are pushed to the wall, they react. Shaheen Bagh is not about the CAA any longer, it is an assertion of a different, much more fundamental strength.

Indeed, it was an assertion of a different kind. Though technically against the CAA–NPR–NRC trilogy, it was actually a cry of anguish against all the wrongs inflicted on the community and on the women. And Muslim women, often erroneously regarded as timid sex bags, hit back at such notions. Many women, in personal conversations, elucidated the reasons for protest.

“We kept quiet when the Supreme Court said the demolition of Babri Masjid was wrong but still gave the site of the mosque to the attackers. We kept our counsel when the government claimed it had freed Muslim women from the danger of triple talaq but formed a law without consulting Muslim women. We kept quiet when they [criminals allegedly belonging to Gau Raksha Samitis] lynched our men in the name of cow protection. But now  it was a question of our fundamental existence. When they are beginning to question our right to be called an Indian, what is the point of any property, any bank balance? We know what happened in Assam. We know what our home minister said again and again, explaining the chronology. We were nervous, we were edgy with all the aggressive sloganeering going on. Then they hit our children. At that time, we said, this much and no further. We went door to door, called each other out knowing if we do not raise our voice today, we would be silenced forever. The choice was simple: either sit at the protest today or prepare to sit in a detention centre a few years later,” said Saima Siddiqui on 12 January 2020, the day the protest registered the highest footfall with estimates ranging from 50,000 to 150,000.

Excerpts published with permission from Shaheen Bagh: From a Protest to a Movement, Ziya Us Salam and Uzma Ausaf, Bloomsbury.