In a sensational development, Arnab Goswami has filed a criminal defamation case against his former colleague Navika Kumar of Times Now accusing her of being jealous of his success. 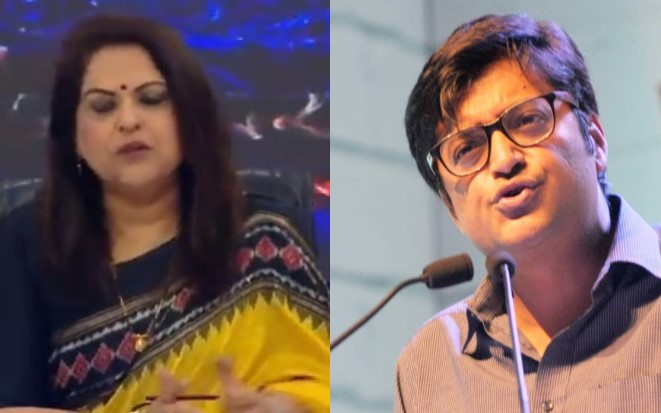 Goswami’s Republic TV has filed a defamation case against Navika Kumar’s prime time show broadcast on 18 January on the former’s WhatsApp chat with the then CEO of the Indian TV rating agency, Partho Dasgupta. The defamation notice reads, “Navika Kumar, the accused, anchored a show on 18 January at 9 pm, called the Newshour- which has been uploaded on YouTube and has over 84,874 views just on the platform, in addition to the LIVE telecast on the prime time at Times Now.”

Navika Kumar is “jealous” and lacks ability to “match the success of #RepublicTV” and that is the reason for the “defamatory show”- alleges the complaint filed by ARG Outlier Media Ltd(company running Republic channels)@republic @Republic_Bharat @navikakumar pic.twitter.com/M1G816cwOu

Goswami has alleged that Navika Kumar was jealous of his success after he left Times Now to launch Republic TV. “..the accused is jealous and the lack of ability of the Accused to match the success of the complainant company (Republic TV). has caused the defamatory show to be aired.”

The complainant added in his criminal defamation case filed before a Delhi court, “By misusing, misconstruing and distorting the documents from the Mumbai Police’s chargesheet in the TRP Scam, mainly the WhatsApp Chats, and without regard to the matter being sub judice both before the lower courts at Mumbai and the Hon’ble Bombay High Court, the Accused Person has gone on a reckless spree to spew grossly defamatory material mentioned below that has been telecast, published, circulated and disseminated on the TV Channel Times Now as well as the internet in various portal such as the Youtube.”

Last week, Arnab Goswami had taken to his TV channel to slam Navika Kumar for her 8-minute-long monologue recalling her difficulties in filling into the controversial anchor’s shoes when the latter quit the Times Group to launch Republic TV in 2016.

Goswami was referring to Kumar’s monologue that Times Now had shared on Twitter on Monday. Navika had started her show with an 8-minute monologue as she said, “Tonight ladies and gentlemen, I don’t know, I just want to begin on a personal note. I know it’s not my place to talk about personal things on a show when I am a journalist, a news person.”

She had gone on to add that she was persuaded to quit her job at The Indian Express by Arnab Goswami to join his team ahead of the launch of the Times Now TV channel. She said that she had learnt the craft of TV broadcast from Goswami, so when the latter left the channel in 2016, she found it hard to step into his shoes.

In his alleged leaked WhatsApp chat, Goswami was seen calling Kumar kachra (rubbish) in reference to one of her interviews with Home Minister Amit Shah.