Janta Ka Reporter 2.0
Home India Who’s Daleep Singh and why is he trending in India? His wife,...

US Deputy NSA Daleep Singh has become a top trend in India and a topic of intense social media conversations. This was after Singh, according to news agency PTI, said that there would be consequences for countries that ‘actively attempt to circumvent the sanctions’ imposed on Russia in the wake of Vladimir Putin’s military invasion of Ukraine. 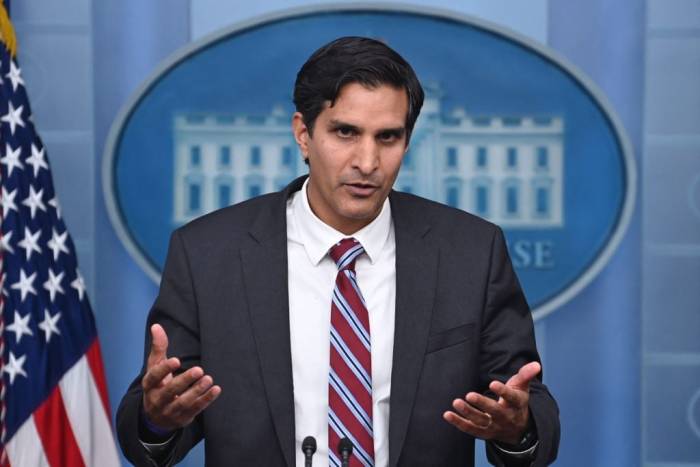 “I don’t think anyone would believe that if China once again breaches the Line of Actual Control, Russia would come running to India’s defence,” Singh was quoted as saying.

Singh was in India for two days to hold discussions with Indian officials on the Russia-Ukraine situation.

The US Deputy NSA’s blunt message to India became a topic of intense social media conversations.

Did anyone, for that matter, come running to India’s defence in 2020?

As if the US will! US didn’t even sanction China for supporting Russia against Ukraine and the West but will sanction them against India. Does every Indian-American leader think we’re fools?

Biden’s deputy NSA Daleep Singh: “if China breaches the LAC, Russia wouldn’t come running to India’s defense.” It’s not a question of “if.” China has been waging border aggression against India for 23 months by breaching the LAC, but Biden refuses to open his mouth on that issue.

You were importing 9% of your crude from Russia till a fortnight beyond the Ukraine invasion. You sat on your bum when China violated the LAC in 2020. It was Russia (SU) that helped us in 1971 when you sided with Pak.

Singh serves as US President Joe Biden’s Deputy NSA and has been leading on the American administration’s sanctions against Russia. Born in Olney, Maryland and raised in Raleigh, North Carolina, Singhe holds a bachelor’s degree from Duke University and graduate degrees from MIT and Harvard University. He lives in Washington DC with his wife and three children.

His granduncle Dalip Singh Saund hailed from Amritsar in Punjab. Saund became the first Asian to be elected to the US Congress from the 29th California District in 1956.

Writing for the White House website, Daleep Singh had said how his story was ‘the story of so many other Indian Americans.’ “In search of a better life for their kids – and maybe a bit of adventure for themselves – my parents left India for America in the 1970s. I was born in Maryland, spent a few years in Chicago, and settled in North Carolina when I was about seven years old,” he wrote.

“I’ve always described my childhood as a happy one. Surrounded by a loving family, I felt like I was part of something bigger than myself, and that my life meant something to those around me. I also felt enormous pride and gratitude in being an American – having the freedom to find and become my authentic self, and the opportunity to dream big, even if in my case these were mostly athletic delusions,” Singh wrote.

Although, Singh is married and has kids, not much is known about his personal life.