Pakistani Prime Minister Imran Khan issued a chilling warning to India on Tuesday that his country will ‘retaliate’ if India attacked its neighbouring country. In a video message Khan said no international law allowed India to act like a ‘judge, jury and executioner.’ 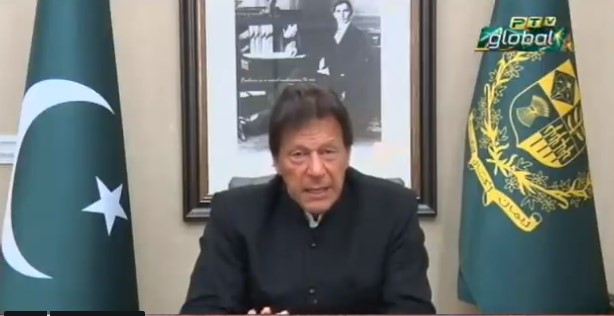 He said, “I am hearing from Indian media and politicians that Pakistan must be taught a lesson. Please tell me which international law allows a country to act like the judge, jury and executioner? I know it’s your election year and talk of an attack on Pakistan will help your agenda. If you think of attacking Pakistan, Pakistan will not consider retaliating, but it will actually retaliate. Pakistan will have  no option but to retaliate.

He said that the reason why he did not react to India’s allegations of being involved in the Pulwama terror attack was because of the visit by Saudi Crown Prince Mohammed Bin Salman. He said, “Few days ago, an incident took place in occupied Kashmir’s Pulwama. I wanted to respond to that incident since allegations were made against Pakistan. But we had a very important visit of Crown Prince of Saudi Arabia due. There was an investment conference, for which we were preparing for a long time. That’s why I din’t make any statement since all the attention would have shifted from our investment conference to that. Now that the Crown Prince has gone, I’m choosing to speak to you.”

Khan said that his video message was directly meant for the Indian government. He said, “First you made allegations against Pakistan. You didn’t provide any evidence. Neither did you think what benefit would Pakistan have from this (Pulwama terror attack).” He said that only a fool would orchestrate a terror attack of this magnitude in India to sabotage a conference, which Pakistan was planning for a long time. Khan said that Pakistan was ready to offer help if India wanted to carry out any kind of investigations on the Pulwama attack.

“If you have any actionable intelligence, please give that to us. I guarantee that we will act on that. I will take action not because I am under any pressure, but because people using the Pakistani soil are being our own enemy,” he added.