Day after a video of a Pakistani fan publicly ridiculing his national cricket team captain Sarfaraz Ahmed inside a London mall went viral, he has released another video apologising for his action. 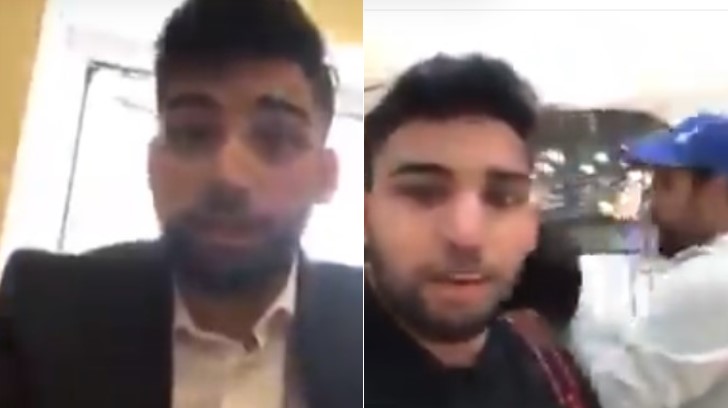 In the viral video, the unnamed Pakistani fan was seen stopping Sarfaraz Ahmed inside West London’s Westfield shopping mall before calling him a pig. Sarfaraz was carrying his child with him when the fan’s expletives left him stunned. After the video of the Pakistani fan went viral, several high-profile individuals from both India and Pakistan had slammed the Pakistani fan for harassing Sarfaraz.

Leading the pack was Indian actor Riteish Deshmukh, who wrote on Twitter, “Every captain in history has lost an important match. #SarfarazAhmed doesn’t deserve this. This is harassment… for heaven’s sake he is with his child.”

Every captain in history has lost an important match. #SarfarazAhmed doesn’t deserve this. This is harassment… for heaven’s sake he is with his child. https://t.co/JU8YFKMPyg

In the video, Sarfaraz was stopped by the fan without realising that he was planning to insult him in front of his child. While filming his act, the Pakistani fan said, “Brother, brother. Why are you fat like a pig?” Stunned by the fan’s comments, Sarfaraz looked back in disbelief but kept on walking. The fan continued laughingly, “You’ve become very fat and you’ve made Pakistan proud. You are fat like a pig. Do some dieting.”

This is in very poor taste. This is bullying. Remember Sarfraz gave us the joy of the ICC Champions trophy just two years ago? Please show some grace.. pic.twitter.com/uKPjjkYPTN

One Indian fan wrote, “I am an Indian..cricket is not life…Shame on the guy who did this to the cricketer..How wud he like if his father was humiliated & abused in front of him?? The joke is on that lousy arse.” “Differences apart, he is a simple man. Criticism for the match is good but this is called humiliation and especially when @SarfarazA_54 is with his kid in his personal space. Good to see his patience and leave from there,” user Tanmay Shankar wrote.

Faced with global outrage, the Pakistani fan released another video apologising for his behaviour. He said that he was not aware how the video made its way to social media. He also said that he was unaware of Sarfaraz being a ‘hafiz-e-Quran (person who’s memorised the whole of Quran)’ “Please forgive me if you can. I am extremely sorry,” he concluded in his latest video.

The man who abused sarfraz today makes an apology in his new video. Saying sorry to @SarfarazA_54 nd whole nation.??
says that he neither new that the kid was his son nor sarfraz is hafiz e Quran

Sarfaraz had faced abuses and ridicule for electing to field first despite winning the toss against India and getting out cheaply. India had gone on to win the match by 89 runs.