South Africa on Sunday lost to a much-improved Pakistani team by 49 runs and saw themselves being knocked out of the cricket World Cup competition. But, one South African player remained the centre of attention not just on the field but also social media for his extraordinary wicket celebrations. He was Imran Tahir, the impressive spinner of Pakistani origin. 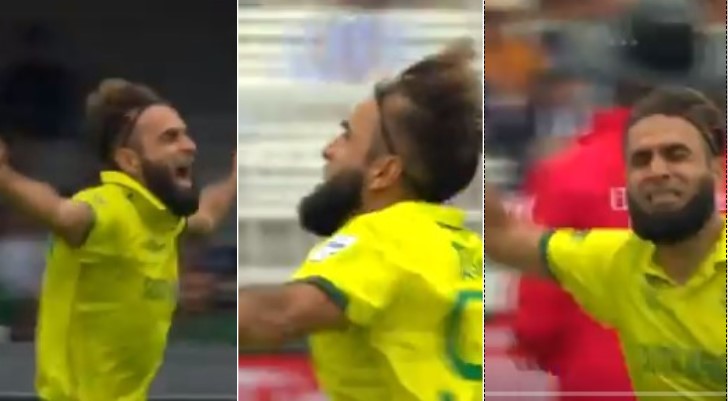 No sooner did her get Imam ul-Haq out with a brilliant return catch off his own balling, Imran indulged in a unique celebration by sprinting across the field. The video of Imran running across the ground in excitement over his second wicket of the match went viral in no time. This resulted in a meme fest on the microblogging site Twitter with Imran Tahir trending for several hours in India.

Imran Tahir’s unbelievable caught-and-bowled was among the highlights of the game. Watch that and all the other Pakistan wickets ⬇#CWC19 | #ProteaFire pic.twitter.com/bBqW8KEgRw

#PAKvSA Imran tahir really deserve all the meme which is trending on Twitter recently pic.twitter.com/MqCvWdpEls

So embarrassing every time Imran Tahir does this! #lol pic.twitter.com/UxkBXJySnp

With the Sunday’s defeat, South Africa were officially eliminated from the World Cup as Pakistan kept their hopes to qualify for the semi-final alive. South Arfica have just three points in seven matches and have two more matches remaining.

As for Imran Tahir, he started his cricketing career by first playing for the U19 Pakistan cricket team but failed to secure a place in the national side. He later moved to England before settling for good in South Africa. Playing for South Africa, he has scalped 172 wickets in One Day Internationals and 57 wickets in Test matches.

Pakistani supporters have often booed him and Sunday was no different. He came for attacks from the Pakistani fans also because of his extraordinary celebrations.