In an extraordinary development, top seed Novak Djokovic has been disqualified from the ongoing US Open tennis championship after he accidentally hit a line judge with a tennis ball in frustration. The development took place during the Serbian’s fourth-round match against 20th seed Carreno Busta. 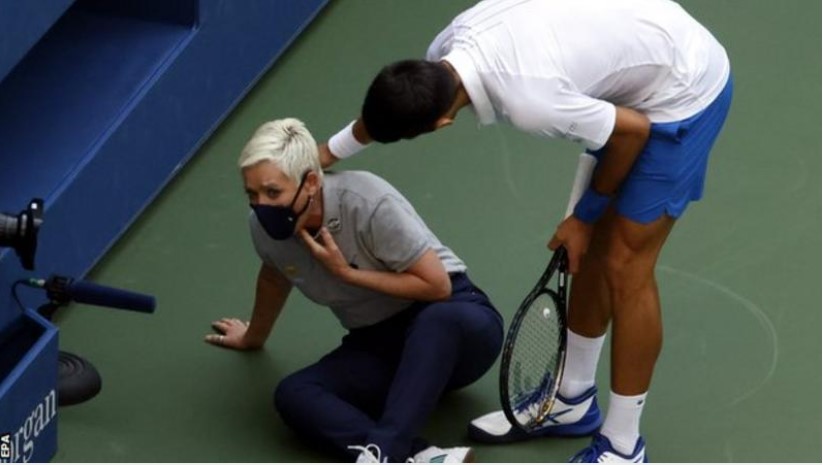 Moments earlier, Djokovic had hit the ball in frustration with his racquet but it only hit a sideboard.

The development prompted the organisers of the Grand Slam to hold a marathon discussion before they arrived at a decision to throw Djokovic out of the championship.

A statement by the United States Tennis Association read, “In accordance with the Grand Slam rulebook, following his actions of intentionally hitting a ball dangerously or recklessly within the court or hitting a ball with negligent disregard of the consequences, the US Open tournament referee defaulted Novak Djokovic from the 2020 US Open.

“Because he defaulted, Djokovic will lose all ranking points earned at the US Open and will be fined the prize money won at the tournament in addition to any or all fines levied with respect to the offending incident.”

Novak Djokovic defaulted from U.S. Open after he accidentally hit a line judge in the throat with a tennis ball. pic.twitter.com/PpuxzkybVv

Djokovic said that he was extremely sorry and ‘this whole situation has left me really sad and empty.” “I checked on the linesperson and the tournament told me that thank God she is feeling OK. “I’m extremely sorry to have caused her such stress. So unintended. So wrong. I’m not disclosing her name to respect her privacy,” he said.

This whole situation has left me really sad and empty. I checked on the lines person and the tournament told me that thank God she is feeling ok. I‘m extremely sorry to have caused her such stress. So unintended. So wrong. I’m not disclosing her name to respect her privacy. As for the disqualification, I need to go back within and work on my disappointment and turn this all into a lesson for my growth and evolution as a player and human being. I apologize to the @usopen tournament and everyone associated for my behavior. I’m very grateful to my team and family for being my rock support, and my fans for always being there with me. Thank you and I’m so sorry. Cela ova situacija me čini zaista tužnim i praznim. Proverio sam kako se oseća linijski sudija, i prema informacijama koje sam dobio, oseća se dobro, hvala Bogu. Njeno ime ne mogu da otkrijem zbog očuvanja njene privatnosti. Jako mi je žao što sam joj naneo takav stres. Nije bilo namerno. Bilo je pogrešno. Želim da ovo neprijatno iskustvo, diskvalifikaciju sa turnira, pretvorim u važnu životnu lekciju, kako bih nastavio da rastem i razvijam se kao čovek, ali i teniser. Izvinjavam se organizatorima US Opena. Veoma sam zahvalan svom timu i porodici što mi pružaju snažnu podršku, kao i mojim navijačima jer su uvek uz mene. Hvala vam i žao mi je. Bio je ovo težak dan za sve.

Reacting to the development, Martina Navratilova, 18-time Grand Slam singles champion, said, “Unbelievable what just happened on the court at the US Open – Novak Djokovic defaulted for inadvertently but stupidly hitting a lineswoman in the throat with a ball and the officials had no choice but to default. Wow #sad.

“Glad the woman is OK – we must do better than that,”

The Serbian was aiming to win his 18th career Grand Slam to close the gap with Rafael Nadal and Roger Federer, both of whom have chosen to give this year’s US Open a miss due to the COVID-19 pandemic.