Rehan Ahmed’s devastating last over guided England to the U19 Cricket World Cup final after 24 years. Needing 232 to win, Afghanistan could only score 215-9 in 47 overs. The match was reduced to 47 overs due to the rain interruption during the play. 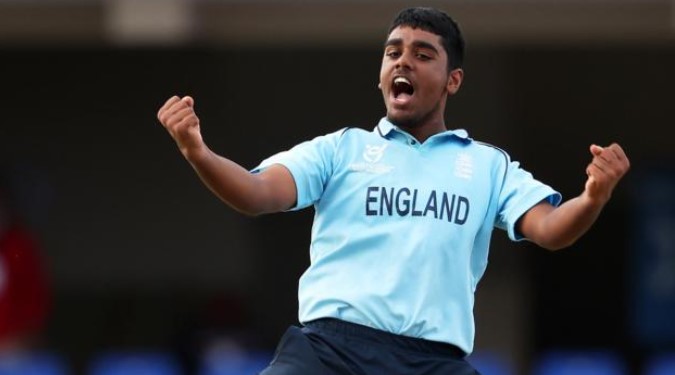 Batting first, England were bowled out for 231 in 47 overs with George Thomas, George Bell and Alex Horton scoring fifities. Thomas made 50, Bell was out for 56, while Horton remained unbeaten at 53.

Afghanistan made a promising start even though they lost their first wicket in the first over. Mohammad Ishaq and Allah Noor batted responsibly and added 93 runs for the second wickets. Ishaq was out for 43, while Noor made 60. Abdul Hadi and Bilal Ahmed also contributed with 37 and 33 respectively, giving Afghanistan a realistic hope to create history.

However, England asked Ahmed to bowl the second last over of the match. Ahmed’s choice was controversial given that he had already conceded plenty of runs in his last five overs. But the young boy was devastating in his last over as he scalped three Aghan wickets, scripting an extraordinary victory for England. He finished with a figure of 4-41 in his six overs.

India and Australia will lock horns in Antigua on Wednesday in the second semi-final. India have won the U19 World Cup on four occasions while Australia are three-time World Champion.