Kane Williamson on Wednesday played one of the most satisfying innings of his ODI career to guide his side to a six-wicket victory over South Africa in today’s World Cup encounter. Batting at 96, Williamson brought up his century with a six in the final over. His winning shot fetched him another boundary taking his score to 106 not out. 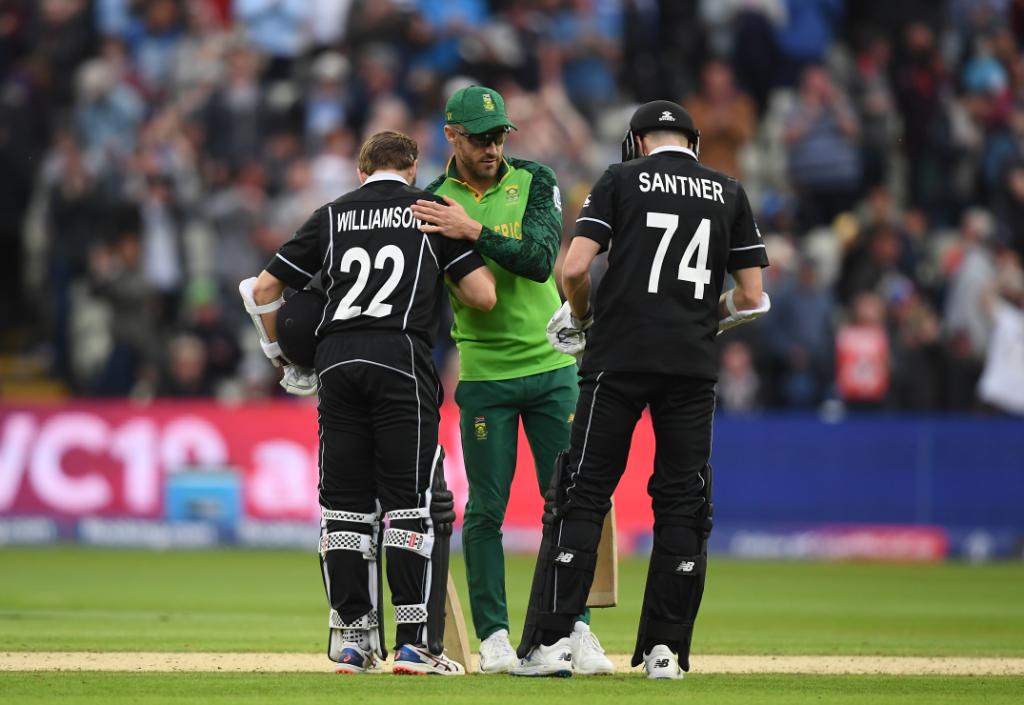 Williamson was given ‘a life’ at 76 when he was caught behind off Imran Tahir, but South Africa could not ‘review’ since it had no more chances left. Willamson was well supported by De Grandhomme, who hit a 39-ball half-century before getting out at 60 off Ngidi.

Batting first, New Zealand’s start was incredibly slow as they struggled to accelerate the run-rate. They had barely put up 40 runs in the first 10 overs for the loss of one wicket. Hashim Amla, who completed 8,000 runs in One Day International matches, provided some stability to the South African innings. When he got out at 55, South Africans were 117 for 3 in the 28th over and appeared to be aiming for 250 plus total.

Amla became the second fastest player to complete the 8,000-run milestone after India’s Virat Kohli. While Kohli had taken 175 ODIs to reach 8,000 runs, Amla took just one more match extra. He needed to score just 24 runs to achieve this milestone.

South Africans accumulated 72 runs in the last 10 overs, taking their total to 242 in 49 overs for the loss of six wickets.

New Zealand too made a cautious start but remained in the game despite losing wickets at regular intervals. New Zealand lost De Grandhomme in the second last over, causing a minor scare to the side. But Williamson went for the kill as he scored a six followed by a four to win the match.

Speaking about his knock, he said, “It’s just trying to do the job as well as you can. I was fortunate I was able to do it today. There were a number of contributions that were so vital. It was one of those surfaces that provides a great spectacle. It could have gone either way but it was great to get the win at the end of the day.”

South African captain Faf Du Plessis said, “I thought 260 was par on this wicket. The chat in the team the whole time was to try and aim at 260, 270. I felt we were 20-short. Good bowling and we were unable to get a few boundaries away.

“I think individual batters will look at having an opportunity to face a bowler they feel they could fancy on the day. I think Kane showed exactly what to do – he found it tricky to score but he waited for one guy, or a period, where he attacked. We had a lot of stop-start and that takes the extra 20 runs off the score.”

Williamson was adjudged the Man Of The Match.