Azhar Ali’s dismissal by the third umpire in the third Test between Pakistan and Australia has sparked a huge outrage on social media. Third Umpire Imran Yaqoob is facing widespread condemnation for his alleged wrong interpretation of the video footage. 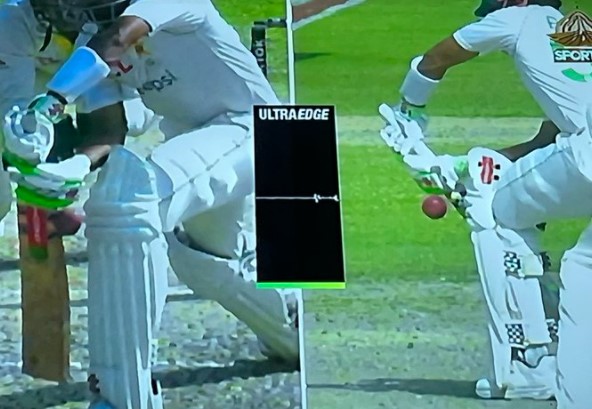 Chasing a target of 351 runs to win the Test, Pakistan appeared to be in control of the match on the fourth day of the Lahore Test. However, Pakistan were placed under considerable pressure after the third umpire declared Azhar Ali out, reducing the hosts to 105-2.

Azhar tried to sweep Nathan Lyon in the 46th over but the ball hit his pad and deflected to the third man’s position where Steve Smith made no mistake in catching it. The on-field umpire refused to declare Azhar out but Smith and his teammates remained adamant, prompting Aussie skipper Pat Cummins to ask the umpire to review his decision.

The third umpire asked the on-field umpire to reverse his decision since there was a slight spike when the ball pass Azhar’s bat. But, not everyone appeared convinced with the third umpire’s rationale.

Commentator Rob Key said that this decision will have a lot of split decisions as an argument for both cases could be made. Aussie commentator Mike Haysman too felt that the video was not ‘conclusive enough’ and he was not ‘not convinced that he was out.’ “There were murmurs before the ball approached the bat as well,” Haysman said.

Azhar too appeared angry while leaving the field as he made his disgust public.

On social media, fans reacted angrily arguing that Yaqoob’s decision would have a considerable impact on the outcome of the third Test.

Asif Yaqoob after pressing the OUT button for Azhar Ali: pic.twitter.com/gawZcUoDum

Australia went on to defeat Pakistan in the Lahore Test by 115 runs and won the series 1-0.