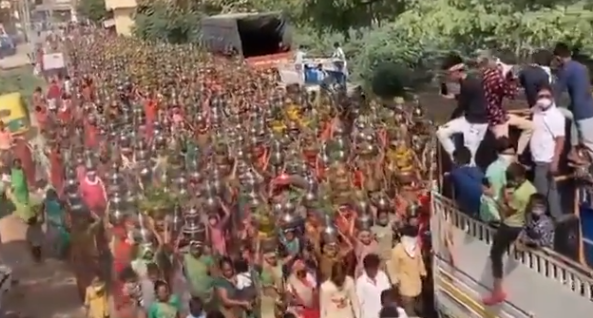 KT Kamaria, DySP, Ahmedabad Rural, was quoted by news agency ANI as saying, “Despite COVID restrictions, women in large numbers gathered at Navapura village in Sanand, Ahmedabad district to offer prayers at the Baliyadev temple, yesterday Action taken against 23 people including the Sarpanch of the village.”

This is the video of the same. Why no action against temple authority? @GujaratPolice pic.twitter.com/U76fPaaddm

One social media user wrote on Twitter, “This is Gujarat Model of Modi Shah. Lawlessness writ large on their faces.” Another wrote, “I still don’t know how this happen. Pure mismanagement by senior officials.”

Many were left in a state of shock by the incompetence of the local government despite the pandemic wreaking havoc across India including Gujarat, which recorded 13,050 new cases on Tuesday. The Indian government led by Prime Minister Narendra Modi has been facing criticism for allowing the Kumbh Mela which attracted more than 10 million people to gather in Uttarakhand. The Kumbh Mela has acted as the super-spreader as Hindus returning from Uttarakhand are testing positive for the virus in large numbers. According to experts, those returning from Kumbh Mela have immensely contributed to the spread of the virus in rural areas, thereby making it difficult for the local administration to deal with the pandemic.