Amidst the raging controversy on India playing their next game against England in a jersey with a dominant saffron colour, captain Virat Kohli has said that it was a nice change. He, however, quickly added that he did not think that the saffron colour should be the permanent colour of the Indian jersey. 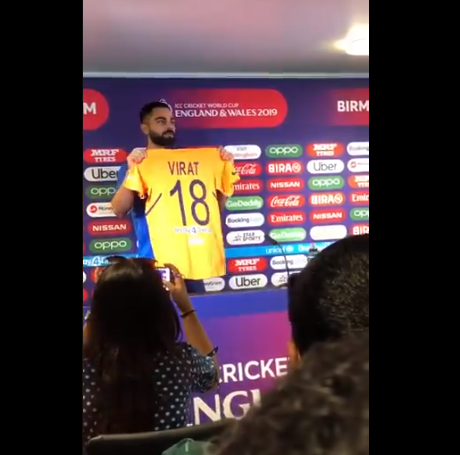 He said, “I quite like this, it’s quite up there. It really looks nice, the contrast is really nice… The fit is great. It’s a nice change, for one game it’s fine. I don’t think permanently we’ll be heading in that direction, blue has always been our color. We’re very proud to wear it. Looking at the occasion, it’s a smart kit.”

Captain @imVkohli gives the new jersey an 8/10 – What about you #TeamIndia #ENGvIND #CWC19 pic.twitter.com/lYdqqS7TuZ

The Indian cricket board has designed a new jersey, which has saffron as a dominant colour for the national team’s next match against England to avoid confusion since English players too have been playing their World Cup matches in a blue colour jersey.

Some politicians belonging to the Samajwadi Party and the Congress had made desperate attempts to communalise the issue by alleging a hidden RSS hand behind the decision.

Speaking to reporters ahead of India’s match against hosts England, Kohli also sought to play down the controversy surrounding Mahendra Singh Dhoni’s performance. He said that the team had complete faith in the former Indian captain. “He stood up for the team many times, especially if you look at this calendar year and performances he has given. I don’t think it’s fair to point out 1-2 performances which anyone can falter with the bat. We’re not looking too much into it.”

Dhoni was criticised for slowing down the run-rate in India’s match against Afghanistan. Former Indian captain and batting legend Sachin Tendulkar too had criticised Dhoni for not being able to score runs at a quick pace.