The second wave of the pandemic has left the Indian government led by Prime Minister Narendra Modi in a spot of bother as it is facing mounting criticism for directionless policies that have caused tens of thousands of deaths across India. Not only had PM Modi declared India’s victory over the coronavirus pandemic earlier this year, but the country’s envoy in the United Nations also foolishly flaunted the government’s priority to send COVID-19 vaccines to people outside the country rather than vaccinating its own people. A new video of an Indian diplomat indulging in chest-thumping at the UN by proudly claiming how the Modi government cared about the rest of the world on vaccinations than its own citizens has gone viral. As expected, this has heaped more embarrassment on an already red-faced government. 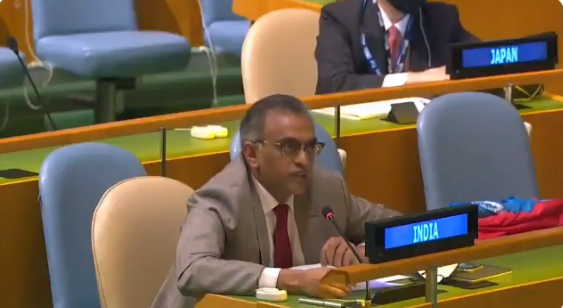 The date was 27 March with the occasion being the General Assembly informal meeting of the United Nations. Representing India, the country’s UN Ambassador K Nagaraj Naidu had said, “India will not only be vaccinating 300 million of its frontline workers in the next six months but in the process has also supplied vaccines to 70 nations.”

Then came the foolish chest-thumping, which is turning out to be a major source of embarrassment for an already beleaguered Modi government. Naidu said, “In fact, as of today, we’ve supplied more vaccines globally than have vaccinated our own people.”

Little did Naidu know then that his admission on the Modi government’s inability to vaccinate its own people ought to have been a source of shame rather than pride.

Here’s how Twitterati reacted to the viral video of Naidu;

Whether GAVI, Grants or commercial contracts, this chest thumping of having given more vaccines to the world than to own speaks volumes of priority- image building over nation.
PS: no other country obligated by contracts did so at the expense of its ownpic.twitter.com/Aof6DvWoC0

India confesses at the UN that they have vaccinated others in the world before they vaccinate their own people! pic.twitter.com/7WOqn2eS4W

A 10 sec video that EXPOSES MODI. India’s representative at the @UN informed the United Nations that India sent more vaccines abroad than has vaccinated its own people. Modi is now truly a world leader. Indians can go to hell. pic.twitter.com/tTF8q60HT5

“We have supplied more vaccines globally than have vaccinated our own people,” confession by India representative at UN General assembly. pic.twitter.com/f4KVD4l0XR

The Modi government has been facing criticism for its inability to vaccinate its own citizens even when developed countries such as the US and the UK have nearly defeated the virus through their successful vaccination policy. The UK is now planning to roll out the third dose of vaccination to prevent its citizens from coronavirus during autumn this year.