Violent protests against the controversial new army recruitment scheme, Agnipath, have spiralled out of control as protesters set trains on fire in several states. 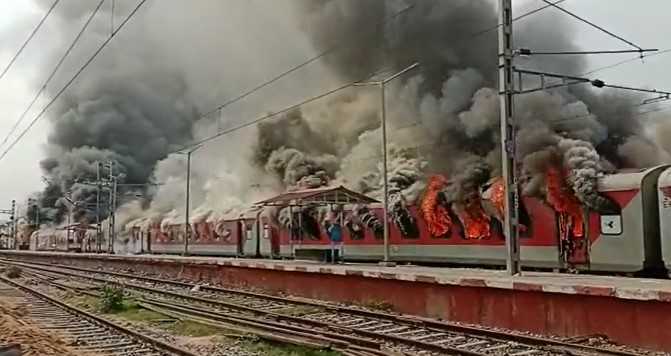 In Lakhisarai in Bihar, protesters set a train on fire. the video of an entire train in flames has now gone viral. Similar reports arrived from Telangana and Uttar Pradesh where the railway ministery alleged that a train was set on fire. In Ballia in Uttar Pradesh, a violent mob is reported to have vandalised the Sealdah Express and set it on fire.

Quoting the railway ministry, ANY reported, “Coaches of 3 running trains in ECR plus one empty rake in Kulharia (ECR) (Bihar), one stabled coach in washing line in Ballia (UP). This is damage to rolling stocks so far. Damages to fixed assets difficult to be assessed & compiled so early.”

Violent protests have been reported from Bihar, Uttar Pradesh, Madhya Pradesh, Telangana and Haryana among others. Angry protesters are reported to have attacked a train and vandalised shops in Secunderabad railway station.

A train was set on fire in Bihar’s Ara district.

Prohibitory orders have been issued across the country to contain the violence.

The government had unveiled the ‘Agnipath’ scheme this week to recruit military personnel into the army, the navy and the air force for a four-year-period followed by compulsory retirement for most without gratuity and pension benefits. According to the government order, only a small portion of them may be considered for continuing service after the completion of four years.

The move has evoked angry reactions from hundreds of thousands of job aspirants from across the country. Political leaders opposed Prime Minister Narendra Modi and his party, the BJP, too have criticised the scheme. Rahul Gandhi tweeted, “Agneepath – rejected by youth. Agricultural Law – Rejected by farmers. Demonetisation – Rejected by economists. GST – Rejected by traders. The Prime Minister does not understand what the people of the country want because he does not hear anything except the voice of his ‘friends’.”

CPI-M leader Sitaram Yechury tweeted, “The Polit Bureau of the CPI(M) strongly disapproves the ‘Agnipath’ scheme that does disservice to India’s national interests. Professional armed forces cannot be raised by recruiting ‘soldiers on contract’ for a period of four years. This scheme, to save pension money, severely compromises the quality and efficiency of our professional armed forces.”