An old video of a Bengali passenger refusing to speak in Hindi with an immigration officer at the Kolkata airport has gone viral even as hashtag #StopHindiImposition became a top global trend in protest against the Centre’s new draft policy. In the viral video, a Bengali passenger, who many are describing to be Trinamool Congress’ Garga Chatterjee, is seen in conversation with an immigration officer while insisting on speaking in Bengali. 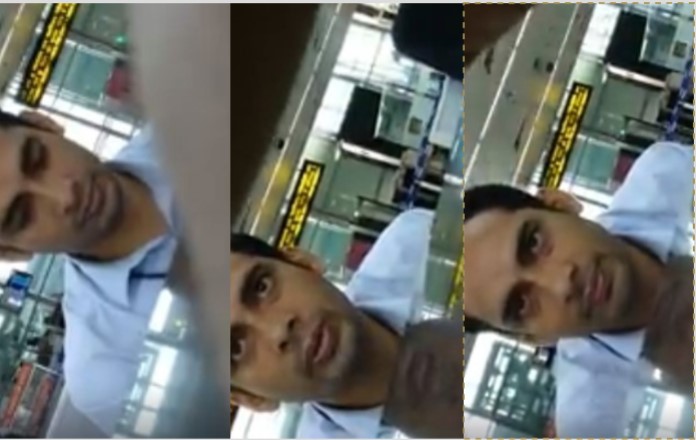 The viral video was shared on a Facebook page called ‘Stop Hindi Imposition’ in May last year. In the video, a Hindi speaking immigration officer at the Netaji Subhash Chandra Bose Airport in Kolkata is seen seeking clarifications on his passport while posing his questions in Hindi. To which, the Bengali passenger is heard abruptly saying, “Ki Bollen Bujhte paarlam naa. (I didn’t understand what you just said.)” The immigration officer continued with Hindi asking if the passenger had acquired a new passport. Pat came an abrupt response from the passenger again as he said, “Hindi Boojhi Na (I don’t understand Hindi.)”

This prompted the passenger to launch a tirade at the Hindi speaking immigration officer asking why he was not equipped to converse with passengers at the Kolkata Airport in Bengali. The unnamed Bengali passenger also reminded him about the Indian constitution informing him that Hindi was not a national language and since the officer was deployed in a ‘category C state,’ he ought to have possessed enough linguistic skills to communicate with local passengers either in English or Bengali.

The video (at the end of this story) has since been viewed by more than 5 lakh people on Facebook alone. This has also earned the Bengali passenger plenty of plaudits from users in  the Indian states of Punjab, Telangana, Karnataka and, most importantly, Tamil Nadu.

The Centre’s Narendra Modi government on Saturday released the Draft National Education Policy 2019, which says that while the ‘three language formula’ followed in a section of schools since 1968 should be continued, ‘children will now be immersed in three languages early on, starting from the Foundational Stage onwards.’

This was widely viewed by many as an attempt by the Centre to make Hindi mandatory till Class 8. Soon, the hashtag #StopHindiImposition began to trend worldwide on Twitter with hundreds of thousands of users venting out their frustration against the move.

Around 19500 languages and dialects are spoken in India as the mother tongue of people. There r 121 languages out of this big lot which is used by more than 10000 people. 23 of them are used by millions.

Why only Hindi? Is it because Most RSS leaders can’t speak other languages? https://t.co/CPrWio46M5

Its just a language .
Being kannadiga I support this . #StopHindiImposition pic.twitter.com/JMHU51efRS

DMK leader MK Stalin has warned the Centre’s BJP government to be careful since the imposition of the new education policy will have serious consequences. He said, “I warn BJP any such move will cause them a huge disaster.” MDMK leader Vaiko, according to NDTV, too warned the Centre of a ‘language war.’