Home Minister Amit Shah has stopped short of admitting that India was at war with China. Speaking to news agency ANI, Shah said that India would win ‘both the wars’ when commenting about the COVID-19 pandemic and tension with China at the Line of Actual Control. 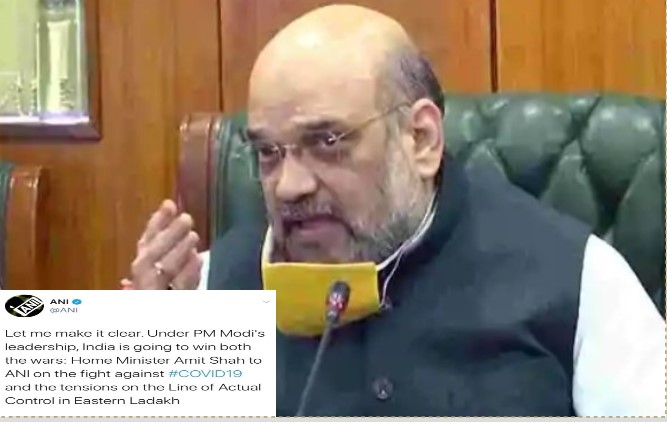 Shah said, “Let me make it clear. We will win both wars. I want to assure people that under Modi ji’s leadership, we will win both wars.” This was after the ANI representative asked Shah, “India in a way is fighting two wars. On the one hand, we have COVID and on the other hand, the Chinese army is troubling us in Ladakh and trying to enter our territory.”

ANI came under criticism after it deleted the news flash on Shah’s statement from its Twitter timeline.

This quote by @AmitShah declares war on China. Why has ace editor deleted this tweet. Do observe how “professional” ANI is pic.twitter.com/LPDifR4xJP

Soon ANI posted the same quote of Shah albeit by replacing ‘wars’ with ‘battles’ seemingly to dilute the impact of the home minister’s comments. Shah had used the word jang,  whose correct translation in English would be ‘war.’ But Shah’s comments would have placed Prime Minister Narendra Modi in a quandary since he has already said it on record that the Chinese army had not entered the Indian territory.

Correction: Let me make it clear. Under PM Modi’s leadership, India is going to win both the battles: Home Minister Amit Shah to ANI on the fight against #COVID19 and the tensions on the Line of Actual Control in Eastern Ladakh pic.twitter.com/xxTvXqKTZS