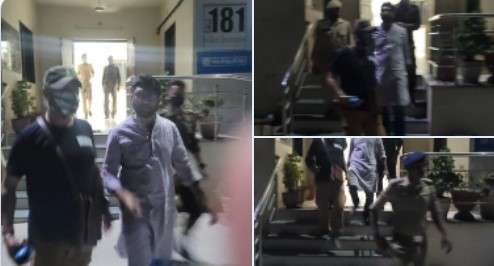 A statement on Mevani’s official Instagram page read, “Vadgam MLA jignesh Mevani arrested by Assam police from Palanpur circuit House at 11:30 p.m. on Wednesday. Police yet to share the copy of the FIR with us. Prime facia we have been informed about some case filed against him in Assam. Temporarily, he was put up at the palanpur city police station and is now been moved to Ahmedabad and is likely to be deported to Assam.”

According to reports, Mevani was arrested from Gujarat before being taken to Assam over some of his tweets. The Vadgam MLA’s Twitter account shows that two of his latest tweets have been ‘withheld’ in response to legal demand by Indian authorities.

A news flash by ANI said that a case was lodged against Mevani under sections 120B (criminal conspiracy), section 153(A) (promoting enmity between two communities), 295(A), 504 (intentional insult with intent to provoke breach of peace), and sections of the IT Act.

Swara Bhasker tweeted, “Just received this message from a friend of @jigneshmevani80 .. Jignesh has been arrested from Palampur circuit house by Assam Police right now. His phones have been withheld. No one has the FIR Copy.. What’s going on? Why is #JigneshMevaniArrested #FreeJigneshMevani RT & share.”

Kanhaiya Kumar wrote, “Vadgam MLA Jignesh Mevani arrested by Assam police from Palanpur circuit House. Police yet to share the copy of the FIR with us, we have been informed about some case filed against him in Assam and is likely to be deported to Assam tonight. -Team Jignesh Mevani.”

According to an update posted on Mevani’s Instagram page, the Assam Police had arrested him from Palanpur Circuit house before taking him to Guwahati via flight from Ahmedabad. “No FIR copy has been given. We have to come together against this gross atrocity against our young Leader Jignesh Mevani who has always fought for the rights of the poor,” the statement read.

Mevani is an independent MLA but has extended support to the Congress.