In a shocking development, a farmer leader’s son has been charged with attempt to murder after he was widely hailed as a hero for successfully turning off the water cannon during the farmers’ protest in Haryana. The video of Navdeep Singh jumping on a water cannon amidst police action had gone viral on social media. 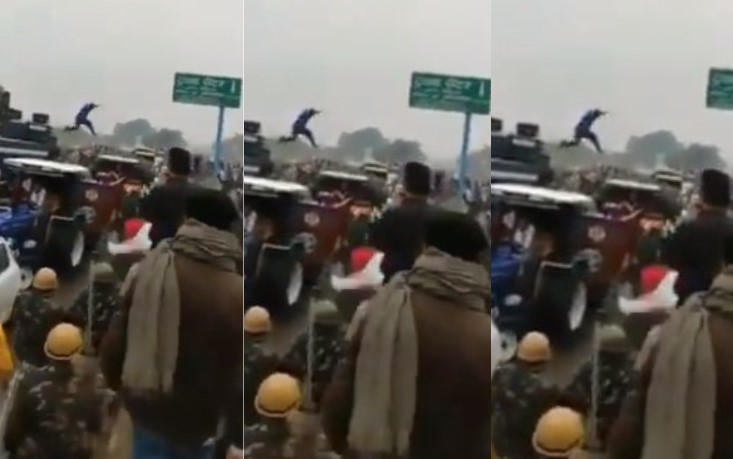 In the video, Navdeep, the son of a farmer leader Jai Singh was seen climbing on a water cannon as cops sprayed water on the protesting farmers amidst freezing cold. Navdeep took seconds to turn off the water, earning plaudits from other farmers.

The incident took place in Mohra village in Ambala district on National Highway 44 on Wednesday. Navdeep told Times of India, “After my studies, I started doing farming with my father who is a farm leader. I never indulged in any illegal activities and got courage from the commitment of protesting farmers to climb the vehicle and turn off the tap as it was hurting them.”

How a young farmer from Ambala Navdeep Singh braved police lathis to climb and turn off the water cannon tap and jump back on to a tractor trolley #farmersprotest pic.twitter.com/Kzr1WJggQI

Thousands of farmers have been marching towards Delhi for several days, prompting the police in BJP-ruled states of Haryana and Delhi to resort to a brutal crackdown. Rights groups have condemned the police brutality against farmers protesting against the farm bills passed by the Narendra Modi government. Farmers say that the government’s agricultural reforms will leave them at the mercy of big companies such as Ambani and Adani, both considered to be friends of Prime Minister Narendra Modi.