The Congress on Thursday launched a tirade against Prime Minister Narendra Modi for his insensitivity towards fallen Indian soldiers after reports suggested that the latter had continued with his film shooting assignment even after learning about the Pulwama attack. 45 CRPF soldiers were killed after a suicide bomber blew himself with more than 350 kgs of explosives in Pulwama on 14 February. 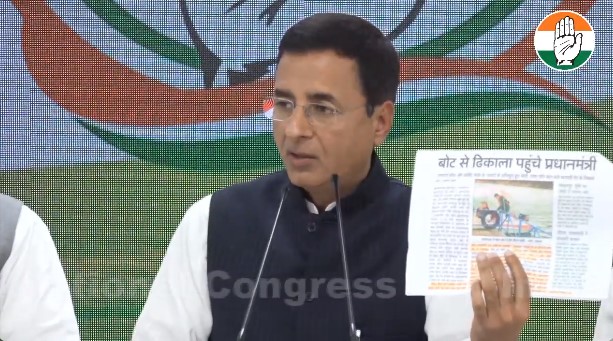 Speaking to reporters, Congress leader Randeep Singh Surjewala said that the terror attack happened at 3:10 pm, but Modi remained unaffected by the news of the deadliest terror attack on the armed forces. According to Surjewala, the prime minister was busy shooting for his documentary for Discovery channel ill 6:40 pm. “When the whole country was mourning the loss of lives of our jawans in the Pulwama attack in the afternoon, PM Modi was busy shooting for a film till the evening. Is there any PM in the world like this,” he asked.

Discovery documentary capturing Modi’s so-called ‘spiritual journey’ before becoming India’s prime minister, will be broadcast later this month, just before the elections. Modi, according to several local media reports, had arrived in Uttarakhand on the day of the Pulwama terror attack for the shooting. The exclusive shooting was held in picturesque Jim Corbett National Park.

The following day, Modi had travelled to Jhansi, seeking votes from the local population in this year’s Lok Sabha polls. Incensed over his ‘inhuman act,’ Surjewala said, “Nothing can be more shameful or inhuman act by any prime minister than what Modi displayed immediately after the Pulwama attack.”

He added, “What can you say about a country’s prime minister, who spends four hours with a film crew and makes people chant slogans in his praise in the immediate aftermath of such tragedy. His insensitivity did not end here. Despite many demands, Modi refused to declare a national mourning in honour of fallen soldiers. That’s because he did not want his scheduled programmes to inaugurate government projects and address voters ahead of the Lok Sabha polls to stop.”

Surjewala was referring to Modi’s programme to inaugurate the semi-high speed train Vande Bharat Express before travelling to Jhansi to address an election rally on 15 February. The story was first published by Janta Ka Reporter on 15 February before a selected few news websites picked up the news a day later.