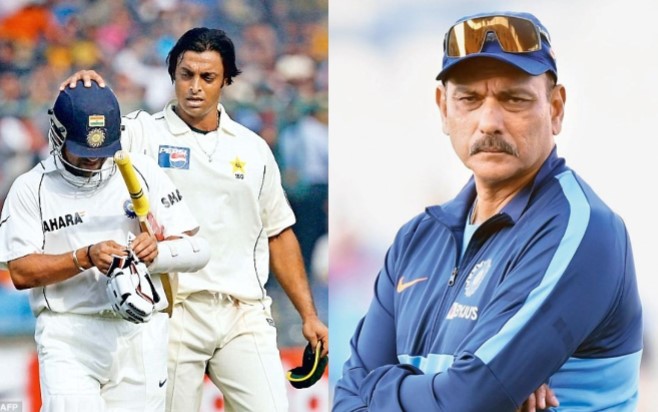 Shastri had appeared on Akhtar’s YouTube channel where the former Pakistani player asked him to describe Virat Kohli and Rohit Sharma since he had worked with both of them as Team India’s head coach. Shastri had said that while Kohli was ‘like a beast’ on a cricket field, Sharma had very ‘laid-back’ attitude in life.

Comparing Sharma to former India skipper Mahendra Singh Dhoni, Shastri had said, “Rohit is pretty much like MS (Dhoni). MS was unreal. I’ve never seen such a guy before. Whether he scores zero, hundred or lifts the World Cup, it doesn’t make any difference to him. I have seen a lot of players, but never seen quite like him (Dhoni).”

Shastri had gone on to say that even Tendulkar had a better temperament. “I’ve seen even Sachin. Fantastic temperament, sometimes gets angry,” Shastri had said.

Shoaib said that Sachin Tendulkar would have scored 100,000 runs if he played with today’s batsman-friendly rules. “I call Sachin poor thing because he had to first face bowlers such as Wasim (Akram) and Waqar (Younis), Shane Warne. Then you asked him to face Brett Lee and Shoaib Akhtar. Then in another era, he was expected to face different fast bowlers. That’s why I call him a very tough batsman.”

Despite his on-field rivalry, Akhtar has always used kind words to talk about Tendulkar. In an interview with Sanjay Manjrekar, Akhtar had once said how he always respected Tendulkar and despite the two being rivals, they never abused each other.

“A couple of batsmen would never speak to me. Sachin would never lose his focus by talking to me,” he had said.