AICC General Secretary in-charge of Uttar Pradesh East on Tuesday launched a blistering attack on Prime Minister Narendra Modi at his home turf while lecturing the latter on the politics of hate. 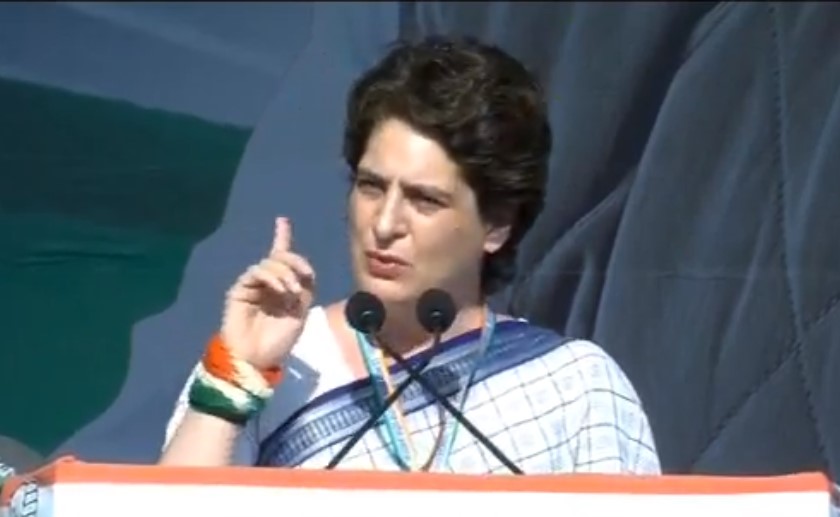 Vadra received a thunderous applause when her name was announced as the next speaker at the rally in Gandhinagar. Crowd chanted Indira Gandhi Zindabad in a reference to her resemblance to her late grandmother and former Indian prime minister.

In her speech lasting for little over five minutes, Priyanka Gandhi Vadra said that she was in tears when she visited the Sabarmati Ashram and sat under a tree on Tuesday morning. She said, “What we are witnessing today in this country is immensely hurtful. There’s no bigger patriotism than to become aware of your rights. Your awareness is a weapon, your vote is a weapon. This weapon is not used to hurt others. This is one weapon that empowers you. You must think long and hard what you are going to do in this election. What are you going to select? You will be selecting your future.”

Vadra continued even as elderly women in the rally filmed her speech using their mobile phones. She said, “Useless issues must not be raised. Issue that are important to you should be raised. How can you move forward? How will our youth get jobs?”

She then shifted her focus on lecturing Prime Minister Narendra Modi on his failed election promises that he had made during the elections in 2014. Without naming Modi, she also slammed him and his party for pushing the agenda of hate in the country.

Priyanka Gandhi Vadra said, “I would like to make an appeal to you that please think before you take any decisions this time. Those who made tall promises to you, please ask them what happened to the promise of two crore jobs. Please ask him (Modi) what happened to Rs 15 lakh that was promises to be transferred into your bank accounts?”

Vadra told the audience at the rally that the fight at hand today was no less challenging than that of the freedom struggle. “Our institutions are being destroyed. Whichever direction you look at, you will only see attempts being made to spread hatred. Nothing is more important for us today than to protect our country from these forces.”