Social media has erupted with huge protests after a Dubai-based gynecologist, also a BJP supporter, allegedly posted a justification for the ethnic cleansing of Muslims in India. Dr Nishi Singh’s profile says that she has lived in Dubai for nearly 25 years and she ‘speaks to you as a mother, as a daughter, a wife, a sister, an aunt, a niece, a physician and a woman.’ 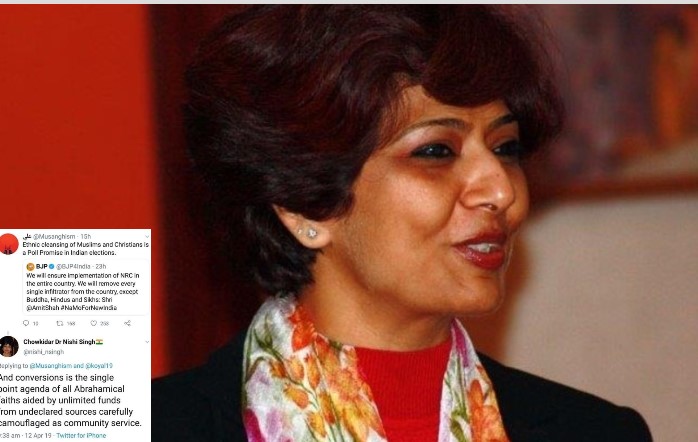 However, her social media profile is replete with support for the Hindutva ideology. One of her social media posts that appeared to cause a huge outrage was posted on 12 April in response to a post by another Twitter user, who expressed his fear for the ethnic cleansing of Muslims in India.

Reacting to BJP President Amit Shah’s recent controversial threats that his government in future will remove every single ‘infiltrator’ except Buddhists, Hindus and Sikhs, one Twitter user wrote, “Ethnic cleansing of Muslims and Christians is a poll promise in Indian elections.

Dr Singh replied with no sense of remorse, seemingly to lend credence to his interpretation of Shah’s controversial remarks. She wrote, “And conversions(sic) is a single point agenda of All Abrahamical faiths aided by unlimited funds from undeclared sources carefully camouflaged as community service.”

Not only did her hate tweet, now deleted, condone the planned ethnic cleansing of Muslims and Christians, it also attacked Islam and Christians. No sooner did she post her tweet, social media platforms particularly Facebook was inundated with angry reactions with users contacting the Dubai Police to take action against her for her bigotry.

Facebook user Rajendra Bhaduri was the first to bring it to people’s attention when he shared the screenshots of Dr Singh’s Islamophobic tweet. Bhaduri wrote;

Lady here is a well-known Doctor and Educationist in Dubai, living there for more than 25 years. Here in this tweet, she supports ethnic profiling and cleansing of Muslims and Christians in India. Her logic is blaming “Abrahamic Faiths” of working on an agenda of converting people through fraudulent means.

There is a hospital in Dubai, named Conceive Gynaecology and Fertility Hospital, owned by Dr. Pankaj Shrivastav. She is his wife, and till a few years back she was shown working as a Consultant Doctor in this hospital. Dr. Nishi Singh has been the Campus Chair for Health Sciences at Dubai Women’s College, and Academic Chair for the Programme of Laboratory at the Higher Colleges of Technology.

She follows and retweets some of the vilest Sanghis on twitter. Chef’Ali Vaidya, Lakad’Bagga, The Skin Doctor, Gaurav Pradhan etc are a few of her favourites. PS: As expected I am blocked by her on twitter and I didnt even know. Just noticed it today when I came across a thread exposing her bigotry.”

The website of Conceive, The Gynecology & Fertility Hospital, which is a part of Avivo Group, has Dr Singh mentioned as one of its employees. (See below)

Meanwhile, many users have now begun tagging their friends in Dubai so that the ‘Chowkidar’ gynecologist could be prosecuted. The UAE authorities had recently deported a man of Indian origin after he expressed his joy for the Christchurch terror attack that killed 50 Muslim worshippers.

Many are asking questions how a person with such vile ideology can work as a gynecologist in a Islamic country. There were others, who demanded a thorough probe into her past works to see if any miscarriages or still births that she was part of could have been due to her alleged criminal intent. One user summed up when she tagged Dr Singh’s hospital ans wrote, “I am sure Muslim women of Dubai are not safe in her hands.”

Janta Ka Reporter has reached out to her to get her reaction. This story will be updated as and when she sends her response.

To read social media users’ angry reactions, you can go through the below post: