Janta Ka Reporter 2.0
Home India “Mamata didi can kick my head, but I’ll not allow her to...

Prime Minister Narendra Modi on Sunday attacked West Bengal Chief Minister Mamata Banerjee during an election rally by accusing her of having conceded a defeat in the upcoming assembly polls. Modi told an election rally in Bankura that ‘Mamata didi can kick my head, but I’ll not allow her to kick dreams of Bengal people.’ 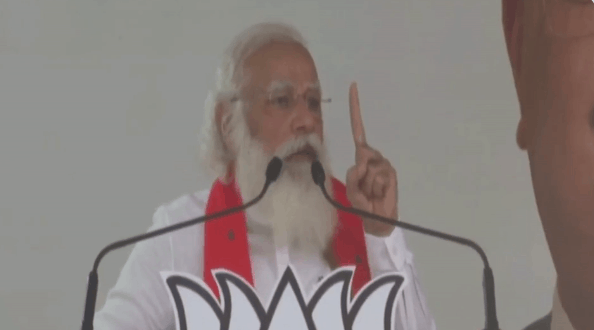 “Didi does not like my face; but in democracy, work for people is seen, not someone’s face,” Modi told the audience. The prime minister said that his party will form a double-engine government in Bengal after 2 May.

He also slammed Banerjee for questioning the authenticity of EVMs saying that this was a sign of her conceding a defeat. “Anticipating defeat in election, Didi has started questioning functioning of EVMs,” Modi said.

Modi’s attack came on a day Suvendu Adhikari’s father, Sisir Adhikari, formally joined the BJP ahead of the first phase of the assembly polls.

West Bengal goes to polls in eight stages with the first phase of polling scheduled for 27 March. The counting of votes will take place on 2 May. Banerjee is seeking a third term in office as chief minister, while the BJP is desperately trying to wrest power to form its first-ever government in Bengal.