Karnataka Chief Minister HD Kumaraswamy on Thursday moved the motion for a trsut vote in the state assembly. But, Speaker KR Ramesh Kumar decided to call it a day despite opposition BJP fiercely protesting against his decision. A BJP delegation met the state governor, who advised the Speaker to hold the floor test by the end of Thursday. The Speaker, however, sought legal advice on the matter. 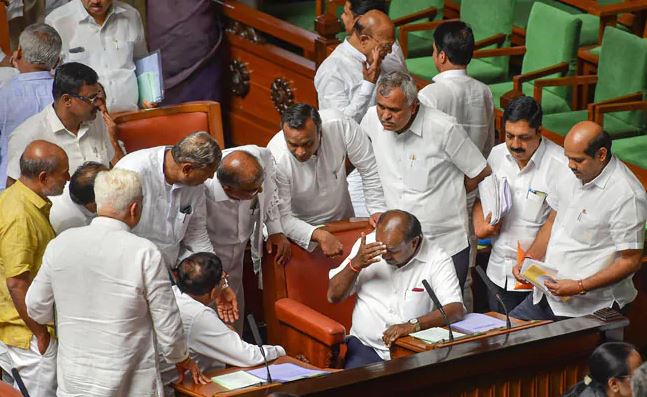 Kumaraswamy’s government was expected to face the crucial test of survival in the state assembly on Thursday with MLAs expected voting to test if the former has adequate numbers to run the government. Kumaraswamy’s government came in danger after more than a dozen MLAs belonging to the Congress and the JDS decided to rebel against the ruling coalition. They submitted their resignations before leaving for Mumbai, a BJP-ruled city where they could enjoy police protection.

The matter reached the Supreme Court, which on Wednesday decided that the Speaker could decide on their resignations whenever he felt appropriate but the rebel MLAs could not face disqualifications even if they voted against the government by defying the party whip.

If 16 MLAs’ resignations are accepted by Speaker Ramesh Kumar, the ruling coalition’s number will come down to 100. However, since Congress MLA Ramalinga Reddy has decided to withdraw his resignation, the number could reach 101 for the ruling coalition. In either case, the government is set to fall after the trust vote.

Karnataka floor test: LIVE Updates- Congress MLA Shrimant Patil, who had slipped out of the resort where party legislators were staying surfaced in Mumbai. He said that he had gone to Chennai, where his condition deteriorated and he was advised to travel to Mumbai for treatment adding that he will return to Bengaluru once his condition improves. The Congress has accused the BJP of luring its lawmakers.

Karnataka floor test: LIVE Updates- Till we get clarification on the Supreme Court’s previous order, it is not appropriate to take a floor test in this session which is against the Constitution. If we go ahead with the confidence motion, if the whip applicable and they (rebel MLAs) don’t come to the House because of the Supreme Court order, it will be a big loss to the coalition government. (ANI)

Karnataka floor test: LIVE Updates- I haven’t come just because there is a question on whether I can run a coalition government or not. Events have shown that even the role of the Speaker has been put under jeopardy by some legislators. (ANI)

Karnataka floor test: LIVE Updates- As things stand, BJP has the support of 107 MLAs, while Congress-JDS has 101 MLAs with them.

LIVE updates: Karnataka rebel MLAs have reiterated that they will not attend today’s trust vote in the assembly.

BJP State President BS Yeddyurappa at Vidhana Soudha | Bengaluru: We are 101 percent confident. They are less than 100, we are 105. There is no doubt that their motion will be defeated. (ANI)

Among those having resigned are 13 Congress and 3 JD(S) MLAs. Their resignations have not been accepted. SC has allowed 15 of them to skip today’s proceedings

The only way for the Congress-JDS government to survive is for the Speaker to hold the proceedings through voice vote. In this case, the Speaker can use his discretion to declare the ruling coalition a winner.