BJP’s Sambit Patra on Friday said that his party was cancelling two political rallies of Prime Minister Narendra Modi in view of Thursday’s terror attack in Pulwama, killing 42 CRPF soldiers. In his unusually short press conference, Patra said that his party stood side by side with soldiers.

A news flash by ANI said that the party had cancelled Modi’s election rallies in Itarsi and Dhar, scheduled for today and tomorrow respectively. The news flash further added that Modi will only restrict himself to launching key government projects. 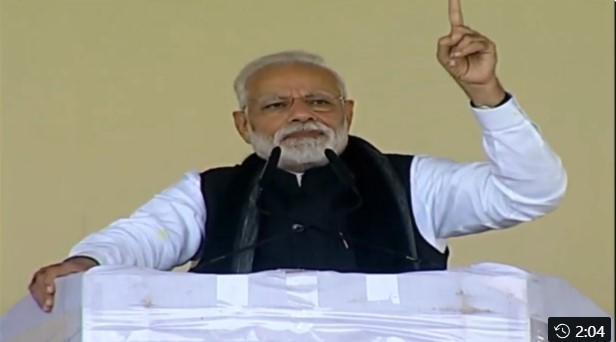 This was to impress upon the unsuspecting public that the BJP was grieving the monumental loss of Indian paramilitary forces in Jammu and Kashmir. But, within moments, Modi proved that reports of his party cancelling election rallies were far from true.

Soon after flagging off India’s first semi high-speed train Vande Bharat Express, Modi travelled to Jhansi in Uttar Pradesh to inaugurate ‘various projects.’ Speakers at the event in Jhansi included Union Minister Uma Bharti, Uttar Pradesh Chief Minister Yogi Adityanath and Modi himself. While Bharti and Adityanath made desperate attempts to avoid indulging in carrying out a political agenda during the national mourning period, Modi could not care less for political correctness. True to himself, Modi thanked the ‘voters of Uttar Pradesh’ for giving his party a landslide victory in 2014 and urged them to give the same ‘blessing’ in the ‘coming days’ too.

In his political speech lasting over 30 minutes, Modi said, “After a long gap of 30 years, if the country has given a strong and decisive government, it’s because the voters of Uttar Pradesh played a key role in giving us a landslide verdict. The resolve of voters in Uttar Pradesh has changed the fate of India.. I am convinced that for the sake of development and building of new India, you will give me your blessings (watch after 52 mins) once again in the coming days.”

Modi’s colleagues namely BJP President Amit Shah, Union Minister Piyush Goyal, Adityanath and BJP MP Manoj Tiwari had come under huge condemnation for carrying on with their election programmes or performing at a music concert even hours after the news of 44 CRPF jawans’ death had become public knowledge.