A viral video of Kanpur councillor Raghavendra Mishra threatening an elderly senior citizen for not supporting the Hindutva party in Uttar Pradesh has gone viral on social media. The video has evoked angry reactions from netizens. Congress leader Rahul Gandhi lashed out at the BJP saying that hooliganism was in the DNA of the Hindutva supporters. 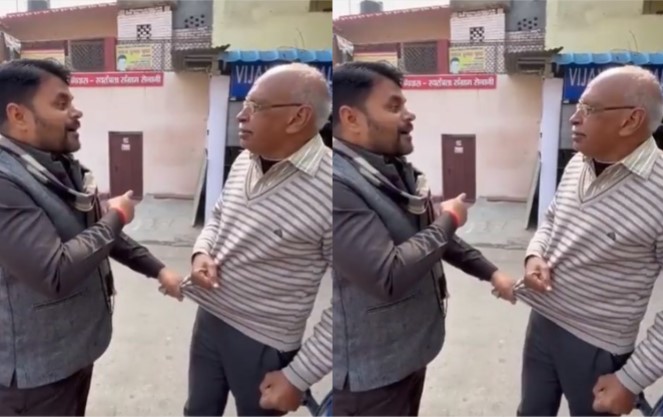 In the viral video, Mishra is seen pulling the senior citizen by holding his jumper as he threatens to teach him a lesson. He’s heard saying, “I will have to make you understand like this.”

Also Read: Singer who threatened to send Muslims to qabristan for not chanting ‘Jai Shri Ram’ arrested along with three others

To which, the elderly person, identified as Bhupen Singh Bhadauria, replied, “Of course you will resort to hooliganism because you have your government (in Uttar Pradesh).”

Twitter users also reacted with shock after the video went viral. One user wrote, “There is no government in India but Hindutwa Ghundagardi.”

Another user commented, “This is UP n BJP ke Aasliyat!! Doesn’t this old man have a family of his own. His family should come n thrash this gunda .. look at the way he is holding on to the poor man’s pullover !! Shameful !!!!!”

“Is this the way to seek votes from people in poll-bound Uttar Pradesh? How arrogant leaders have been given chance to represent the BJP?
@BJP4UP If this is not open hooliganism, what else will be?,” commented another user.

Later, another video surfaced where both Mishra and Bhadauria are saying that the viral video was a part of a joke.

The senior citizen claims himself to be uncle of Raghavendra Mishra.

“We were merely joking as why i should join the #BJP“, says the senior citizen. pic.twitter.com/VC6kLUQrC5

Uttar Pradesh is has had a BJP government under Chief Minister Yogi Adityanath, who started his political career as the leader of a militant Hindu organisation, Hindu Yuva Vahini.

The state goes to the polls in seven stages from this month. The counting of votes will take place on 10 March.