Adopting an aggressive stance on the current political crisis, Karnataka Chief Minister HD Kumaraswamy on Friday left the decision to hold a floor test in the assembly to Speaker KR Ramesh Kumar. He also said that he was moving the Supreme Court against the ‘love letter’ he had received from Governor Vajubhai Vala. 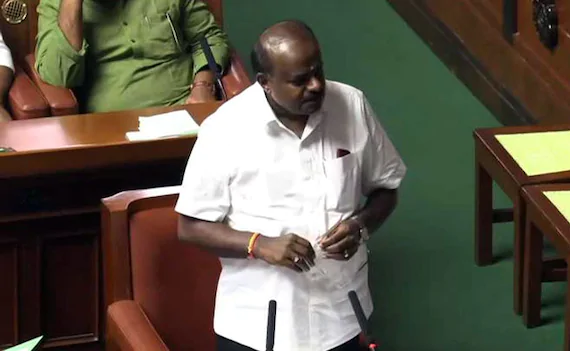 Vala had first written to Kumaraswamy on Thursday directing the chief minister to prove his majority in the assembly by 1.30 pm on Friday. In his letter, Vala had said that Kumaraswamy lost ‘the confidence of the House’ adding that the impasse could no go on forever in a democratic set-up, which was governed by the constitution of India.

However, when Kumaraswamy ignored his deadline on Friday, the governor dispatched a second letter directing him to prove the majority by the end of today. An aggressive Kumaraswamy responded to his letter inside the assembly as he said, “I leave the decision on the floor test to you (the Speaker). It won’t be directed by Delhi. I request you to protect me from the letter sent by the Governor.”

Kumaraswamy, according to news agency ANI, added, “I have respect for the Governor. But the second love letter from the Governor has hurt me. He only came to know about horse-trading 10 days ago?” The chief minister also showed photos of Karnataka BJP chief BS Yeddyurappa’s PA Santosh, reportedly boarding a plane with independent MLA H Nagesh as he left for Mumbai.

Meanwhile, Speaker Ramesh Kumar has adjourned the House till Monday, when the trust vote may take place.

Kumaraswamy’s government has been reduced to a minority after over a dozen MLAs belonging to his party, the JDS, and the coalition partner, the Congress, resigned and left for Mumbai, where they’ve enjoyed the protection of the Mumbai Police, which reports to the state’s BJP government.

Known Congress troubleshooter DK Shivakumar had travelled to Mumbai to meet the rebel MLAs, but he was stopped from entering the hotel by the Mumbai Police even though he showed a valid reservation for himself. The hotel had later cancelled his booking citing emergency situation.

The Supreme Court had earlier this week said that Speaker was well within his rights to decide on the rebel MLAs’ resignations at an appropriate time, but had also said that no action should be taken on the disqualification of rebel MLAs.