Twitterati woke up to see a new hashtag #NoToJaiShriRam trending on top on the microblogging site Twitter across India on Wednesday. While some found the trend incredibly provocative since the hashtag also implied urging people to not chant the name of Ram, the real motive behind the new trend was different. 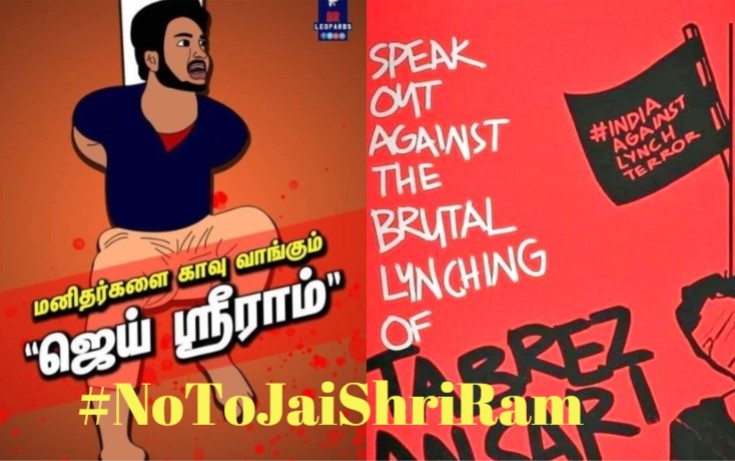 Apparently, the hashtag was launched by a group of Tamil social media users, who were moved by the brutal lynching of 24-year-old Tabrez Ansari in a BJP-ruled Jharkhand. Ansari, who worked as a welder in Maharashtra’s Pune, had come home to celebrate Eid with his family and get married.

He was caught by a mob on suspicion of being a thief, which his family has vehemently denied. The mob tied him to a pillar and mercilessly assaulted him all through the night. In the viral video, Ansari was forced to chant Jai Shri Ram and Jai Hanuman. Ansari succumbed to his injuries four days later inside the police custody.

People behind trending the hashtag #NoToJaiShriRam say that they don’t want the Hindutva gang to defame the name of their God for indiscriminate killings of innocent people.

#NoToJaiShriRam I am a hindu but this is the worst act ??‍♂️ pic.twitter.com/etNvCO2neJ

Police mishandling of the case which reslted in death of Tabrez Not Shri Ram
*famly wasnt allowed to meet him
*squeezd the every ounce of life by depriving him of stretcher
I predicted it early before ,the day this thing got viral
Mob didnt kill him it was police #NoToJaiShriRam pic.twitter.com/dbQVfviB0D

Reacting to Ansari’s murder, Prime Minister Narendra Modi told the parliament on Wednesday that he was saddened by the lynching. He, however, also slammed the opposition for defaming Jharkhand by calling it a factory of lynching and violence.