The Supreme Court on Friday transferred the case from the Varanasi judge, who had ordered to seal the Gyanvapi mosque premises after the Hindu side claimed to have found Shivling from inside the Muslims’ place of worship. The top court witnessed a forceful argument from the lawyer representing Muslims as he accused the government lawyer of attempting to gag him. 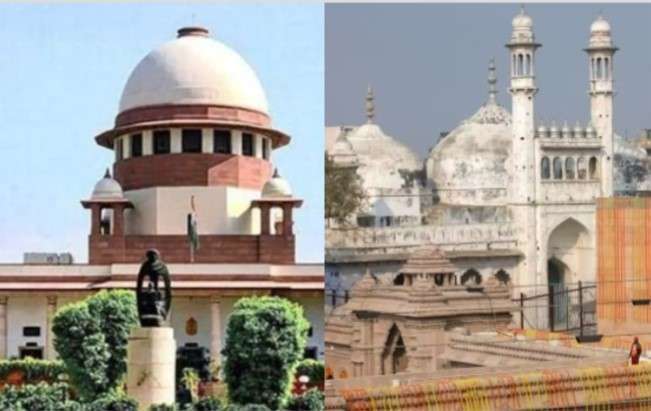 After Huzefa Ahmadi, the lawyer for the Muslim party, made powerful arguments, the top court decided to transfer the case from the civil judge to a district judge with more experience and seniority. The Supreme Court Bench of Justices DY Chandrachud, Surya Kant and PS Narasimha also directed the District Magistrate of Varanasi for making wudhu (ablution) arrangements for Muslims to continue with their prayers inside the mosque. Justice Chandrachud made it clear that this arrangement did not mean ‘alternate’ to the existing pond inside the mosque.

Justice Chandrachud clarified, “We have said arrangement, not alternate arrangement.”

The Supreme Court, in its order said, “Having regards to complexities involved in civil suit & the sensitivity we are of the view that the suit before the Judge, Varanasi should be tried before a senior and experienced judicial officer of UP Higher Judicial Service.”

“The application filed under Order 7 Rule 11 CPC shall be decided on priority by the District Judge. The interim order dated May 17 of this Court shall continue in operation till O 7 R 11 is decided and for a period of 8 weeks thereafter,” the SC order read.

Ahmadi : This is an attempt to gag, this interruption.

Ahmadi : On the basis of the application, the entire area is sealed.

Immediately after the Hindu party had claimed to have discovered a Shivling in the pond used for performing wudhu, a Varanasi court judge had ordered the authorities to seal the mosque premises. However, the Supreme Court her reversed the Varanasi court’s order and said that Muslims would continue to offer namaz inside the mosque.

Ahmadi on Friday had pointed out the difficulties for Muslims to perform namaz without being allowed to use the sealed pond to perform wudhu.

Ahmadi had drawn the court’s attention that the Places of Worship Act was being violated by allowing the survey of a mosque, which existed for more than 500 years. He said that this would prompt others to stake similar claims on other mosques in the future.

At one point during the argument, Ahmadi accused the lawyer for the Hindu party of gagging him. “While the Commmisison is in progress, there is an application moved by plaintiff ex-parte, which relies on confidential proceedings of Commission to suggest a #Shivling has been seen. According to us, it is a fountain,” Ahmadi said.

To which, S Vaidyanathan interrupted as he said, “I have a serious objection.”

Taking a dim view of the Hindu party lawyer, Ahmadi protested, “This is an attempt to gag, this interruption.” It required a judge’s intervention to ensure that Vaidyanathan did not interrupt Ahmadi.

The case relates to a controversial order by a lower court in Varanasi after it appointed a court commissioner to conduct a survey and videography of Gyanvapi mosque. The Muslim party approached the Allahabad High Court to challenge the order, but the HC rejected the appeal on 21 the appeal.

The Muslim party and then moved the Supreme Court. Meanwhile, the survey was conducted and the Hindu party claimed that it had discovered a Shivling from inside the pond, which was being used for performing wudhu. According to Muslims, the structure being claimed as a Shivling is essentially the fountain in the pond.