The gruesome murder of Kerala’s pregnant elephant dominated social media conversations all through Wednesday with many demanding stringent actions against those responsible for feeding the animal a pineapple filled with firecrackers. But, it did not take long for India’s right-wing brigade to add a communal colour to what was an utterly cruel act. Leading the campaign to communalise animal cruelty were usual suspects in the right-wing ecosystem in India. 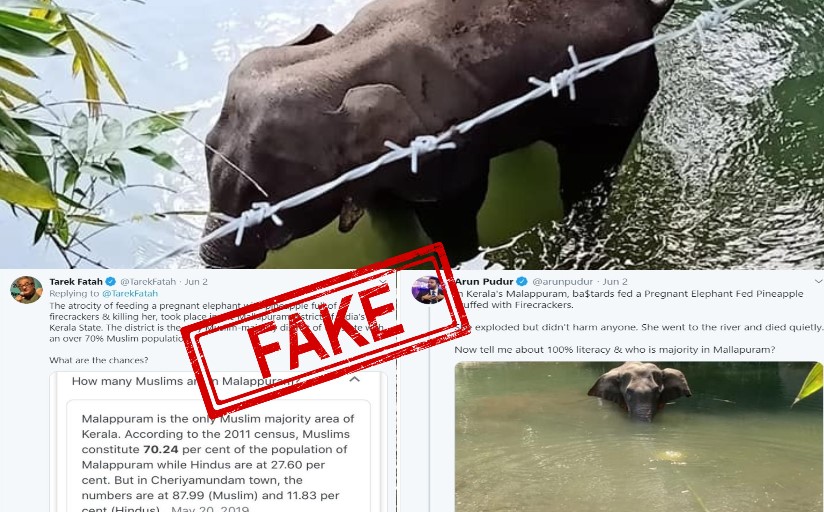 Known fake-news peddler and Canada-based troll of Pakistani origin, Tarek Fatah, tweeted, “The atrocity of feeding a pregnant elephant with pineapple full of firecrackers & killing her, took place in the Mallapuram district of India’s Kerala State. The district is the only Muslim-majority district of the state with an over 70% Muslim population. What are the chances?”

The data that Fatah relied on was an article written by right-wing website, Swarajya, which was included by the BBC in the list of outlets and individuals that had peddled fake news routinely. 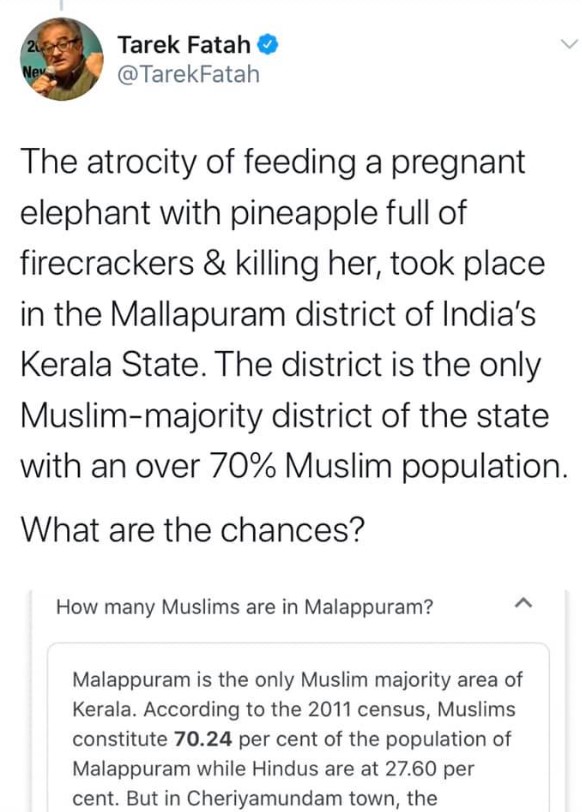 Another known right-wing individual, Arun Pudur, who was recently caught lifting photos from an American brewery to claim that he was distributing hand-sanitisers amidst the coronavirus pandemic. Pudur too chose to highlight Mallapuram in his tweet to add a communal colour. Pudur, “In Kerala’s Malappuram, ba$tards fed a Pregnant Elephant Fed Pineapple Stuffed with Firecrackers. She exploded but didn’t harm anyone. She went to the river and died quietly. Now tell me about 100% literacy & who is majority in Mallapuram?” 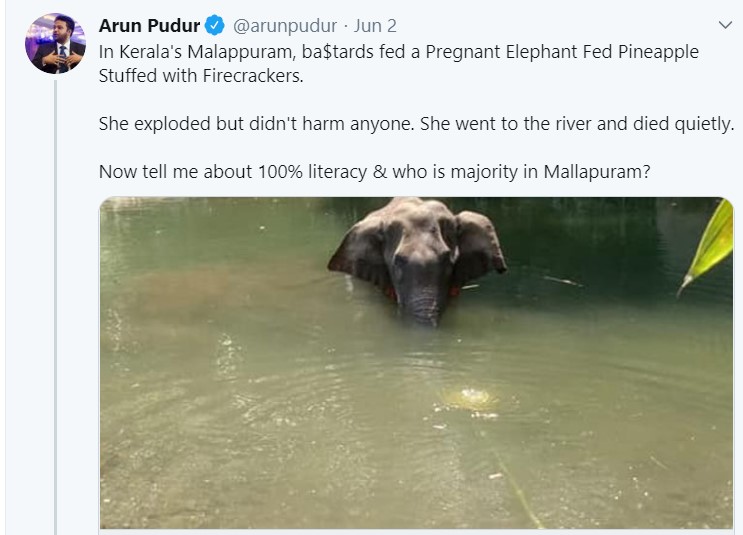 There were many others including former Union Minister Maneka Gandhi, who too made special mention of Mallapuram while reacting to the murder of the pregnant elephant.

What is the use of 100% literacy when people forget humanity and feed a pregnant elephant explosives to watch it die?
This incident has filled my heart with so much sorrow that I hang my head in shame for being a fellow human.

Mallapuram is a minority hotbed. Need I say more? https://t.co/ZEYdwalVIA

Mallapuram is know for its intense criminal activity specially with regards to animals. No action has ever been taken against a single poacher or wildlife killer so they keep doing it.
I can only suggest that you call/email and ask for action pic.twitter.com/ii09qmb7xW

The pregnant elephant in question was murdered in Palakad and not Mallapuram as claimed by the right-wing social media users. The news of the elephant’s death was brought to light by a forest officer, Mohan Krishnan, who was part of the rapid response team, which attended to the injured animal in Mannarkkad in Palakkad district. It was Krishnan’s Facebook post in Malayalam, which had gone viral, evoking angry reactions from around the globe.

Prominent news outlets operating out of south India such as The Hindu and The New Indian Express also reported that the elephant died after consuming explosives-laden pineapple in Palakkad, which is around 80 kilometers away from Mallapuram district. 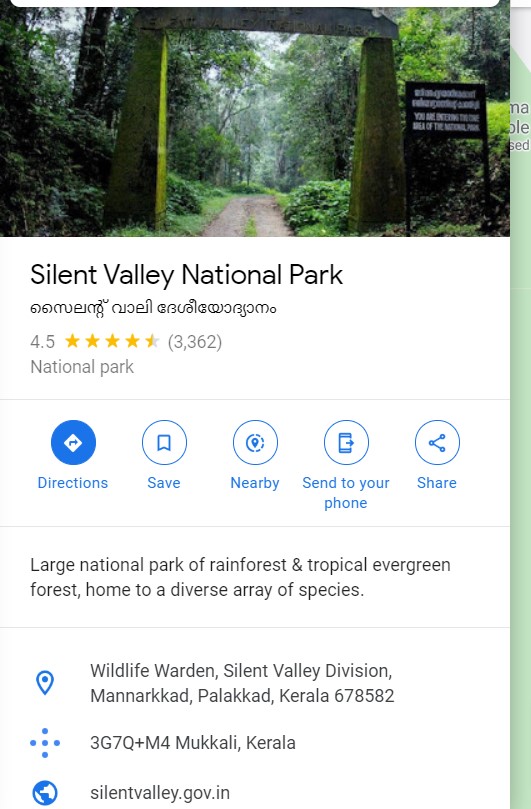 News agencies IANS spoke to Samuel Pachuau, the Wildlife Warden of the Silent Valley National Park in Palakkad, who said that he was certain to find the perpetrators of this crime. He added, ”

Speaking to IANS Samuel Pachuau, the Wildlife Warden of Palakkad’s Silent Valley National Park, near here said this was a serious crime whosoever was behind it. He added, “It was on the 23rd of last month we came to know about this incident when the elephant was spotted near a water source outside the National park.”

Another report by Reuters news agency said, “Forestry officials said the incident happened on May 23 in the Palakkad district of Kerala state in southern India, near farmland where locals sometimes scatter fruit spiked with firecrackers to discourage animals from damaging crops.”

So our investigation proves that the claim made by India’s right-wing brigade about Mallapuram is FAKE.