Last week, Janta Ka Reporter reported how the Election Commission had no records of nearly 20 lakh EVMs as no one knew where these machines had disappeared. 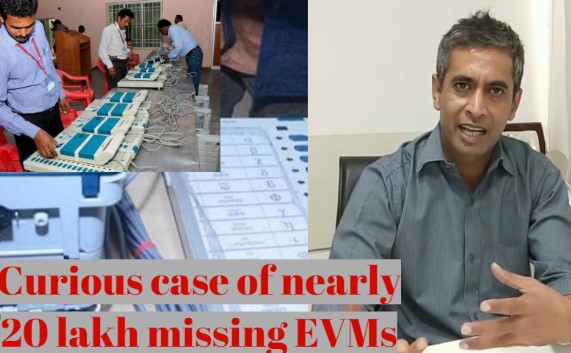 This was based on RTI replies obtained by Mumbai-based activist Manoranjan Roy, whose queries to the Election Commission and the two Indian manufacturers of EVMs had revealed stunning results. According to his RTI replies, while the Bengaluru-based BEL and Hyderabad-based ECIL had admitted supplying nearly 40 lakh EVMs to the Election Commission, the national poll body said it only had a record of 20 lakh EVMs.

Although Roy had obtained these replies in 2017 and 2018 and Janta Ka Reporter had published a detailed report after speaking to the RTI activist last year, the topic gained fresh momentum after The Hindu group’s Frontline published it as part of its cover story.

Janta Ka Reporter’s editor-in-chief Rifat Jawaid also recorded a video blog, which was shared from the website’s official Twitter and Facebook handles last week. The Election Commission’s reaction was also adequately reported from all our platforms.

And yet, the Election Commission, whose integrity has come under a huge scanner in this year’s Lok Sabha polls, secretly contacted Twitter to have our content withheld.

The correspondence claims that the following content is in violation of Indian law:

We are notifying you of this request about your account so that you may decide whether or how you will respond. Please note that we may be obligated to take action regarding the content identified in the request in the future.

As Twitter strongly believes in defending and respecting the voice of our users, it is our policy to notify our users if we receive a legal request from an authorized entity (such as law enforcement or a government agency) to remove content from their account. We provide notice whether or not the user lives in the country where the request originated.

When we take action on legal removal requests — and as long as the request does not prohibit us from doing so — we also notify Lumen, an independent, third-party research project studying and publishing such requests.

We understand that receiving this type of notice can be an unsettling experience. While Twitter is not able to provide legal advice, we want you to have an opportunity to evaluate the request and, if you wish, take appropriate action to protect your interests. This may include seeking legal counsel and challenging the request in court, contacting relevant civil society organizations, voluntarily deleting the content (if applicable), or finding some other resolution. For more information on legal requests Twitter receives from governments worldwide, please refer to this article on our Help Center and our biannual Transparency Report.

Here’s the video that the Election Commission doesn’t want you to watch:-