The Election Commission of India has sought a report from the West Bengal chief electoral officer after the Trinamool Congress complained that photos of PM Narendra Modi were being printed on COVID-19 vaccination certificates in violation of the model code of conduct ahead of the crucial assembly polls in the state. 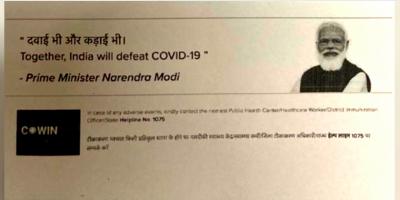 The Trinamool Congress on Tuesday had approached the poll panel about Modi’s image on vaccination certificates generated through the Co-Win website calling it a violation of the model code of conduct in Bengal and other poll-bound states.

The latest development comes a day after the ECI asked officials to remove hoardings carrying Modi’s photos from petrol pumps in poll-bound states. However, critics had alleged that this was to help the BJP given the prevalent anger among voters over the extraordinary hike in fuel price in India.

What are your thoughts on COVID-19 vaccination certificates carrying the PM’s photos during assembly polls? You can leave your commenst below.