The BJP on Friday announced a deal with Dushyant Chautala’s Jannayak Janata Party to form a new government in Haryana. According to the alliance deal, Chautala will be given the post of the Deputy Chief Minister, while Manohar Lal Khattar will take oath as the state’s Chief Minister for the second time. 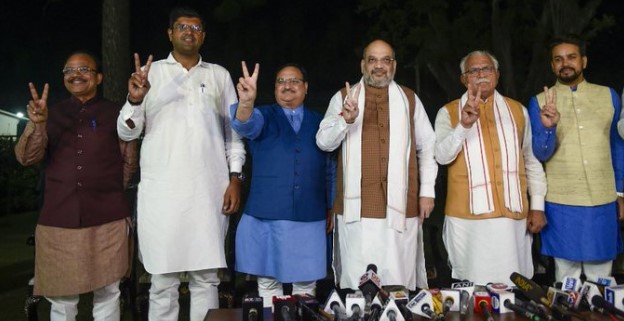 This was after Union Minister Anurag Thakur and Chautala met at the former’s house in Delhi before both travelling to meet Home Minister Amit Shah’s residence for a final deal. Chautala has reportedly said that the deal with the BJP was necessary to provide stability in Haryana.

Earlier in the day, the 31-year-old politician had told reporters that he was holding talks with both the BJP and the Congress.

In the just-concluded assembly elections, the BJP failed to secure a majority and had to contend with 40 seats in the 90-seat Haryana assembly. Chautala’s party had won 10 seats, while the Congress surprised poll pundits by winning 31 seats, 16 more than its tally in 2014. Others including independents won 9 seats.

Minutes after the results were made public on Thursday, the BJP had flown all independent MLAs including rape-accused Gopal Kanda to Delhi in a chartered plane. However, the saffron party seeking support from a rape accused MLA to form the government had evoked angry reactions with even senior BJP leader Uma Bharti publicly expressing her disgust over the development.

With Chautala coming on board, the BJP will no longer need Kanda’s support to form the government.