Congress leader and former Madhya Pradesh Chief Minister Digvijay Singh has condemned the demolition of Computer Baba’s ashram in Indore by the state’s BJP-led government.  The self-styled godman, whose real name is Namdeo Tyagi, was also arrested along with some of his supporters during the demolition drive. 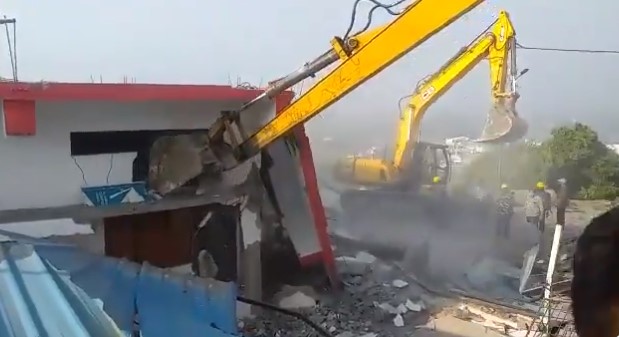 Tyagi had a cabinet minister’s status in the previous Madhya Pradesh government headed by Kamal Nath and had backed Congress candidates in the just-concluded assembly by-polls.

Reacting to the development, Singh tweeted, “As part of a witch-hunt, Computer Baba’s ashram and temple are being demolished in Indore without any notice. This is the height of political revenge. I condemn this.”

With an estimated market value of Rs 80 crore, the ashram in question is spread over 40 acres of land. According to officials, they had found illegal construction and encroachment on nearly two acres.

“The preventive arrests were made under Section 151 of the Code of Criminal Procedure (CrPC) during demolition of illegal construction on government land in Tyagi”s ashram at Jamburdi Hapsi village on Indore”s outskirts,” Superintendent of Police (western region) Maheshchandra Jain was quoted by news agency PTI.

Computer Baba was associated with the BJP government of Shivraj Singh Chouhan, enjoying a minister status before he switched side and extended his support to the Congress. After Kamal Nath became the state’s chief minister, the godman was appointed as the head of a river trust.

He had launched a ‘Save Democracy’ campaign in the run-up to the by-polls for 28 seats, calling 22 Congress MLAs, who deserted the party to join the BJP, traitors.

The resignation of these 22 MLAs at the behest of Jyotiraditya Scindia had led to the fall of the Kamal Nath government.