One name suddenly gaining traction on the internet in the last 24 hours is Tanmay Fadnavis, the nephew of former Maharashtra Chief Minister Devendra Fadnavis. Detractors of the BJP leader have launched a tirade against Fadnavis after a photo of Tanmay Fadnavis flaunting about his vaccination emerged. Many are asking how the young Fadnavis was allowed to get himself administered for COVID-19 vaccine when he did not appear to fall in the category of the eligible population, 45 years and above. 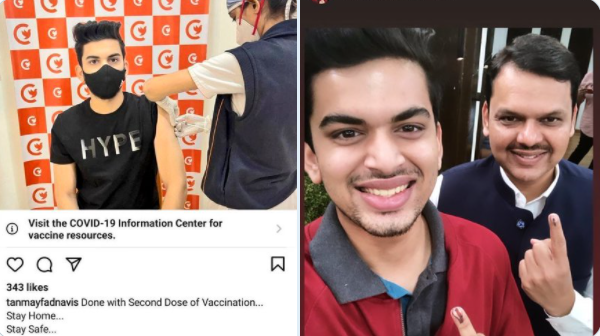 One Congress leader shared a photo of Tanmay from his Instagram page where he was seen bragging about his COVID-19 vaccination. The screenshot had the caption allegedly written by Tanmay Fadnavis that read, “Done with second dose of vaccination. Stay home, Stay safe.”

This prompted many to ask how a 23-year-old man was allowed to get himself administered both the doses of COVID-19 vaccines just because he was the nephew of a former chief minister and a BJP leader.

You want to understand the Sangh values in a nutshell look at @Dev_Fadnavis desperate to claw back power, thinks nothing of letting his 23 yr old nephew #tanmayfadnavis jump the vaccine queue & does shady deals on essential drugs.

One look at #tanmayfadnavis Instagram page and you could quite easily make a deduction that he is rich, spoilt, entitled, self obsessed kid with total IQ in single digit.
A glimpse of his mindset: pic.twitter.com/8i3tIxLeDV

A 23 year old #tanmayfadnavis has a private jet….he gets vaccine when he is actually not eligible…. Bus ab aur kitne acche din dekhne hai. pic.twitter.com/MVuJ1z1ViV

Maharashtra, where Tanmay resides, has become the worst-affected Indian state by the second wave of the pandemic. The state government had earlier said that it was unable to continue with the vaccination programme as it ran out of vaccine stock. Fadnavis has not made any comments on the latest controversy.