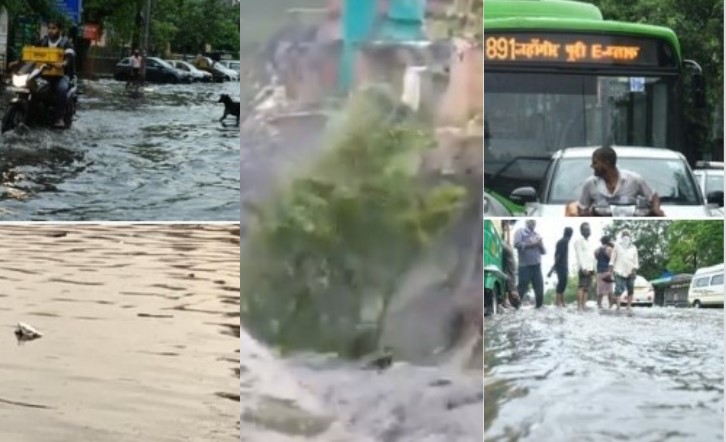 Elsewhere, a shocking video of several houses collapsing into a drain near ITO went viral. The video was reportedly shot from Anna Nagar, a slum dwelling near Delhi’s Secretariat, Delhi chief minister’s office. In the video, several houses could be seen collapsing one after the other into a swelling drain. It’s not clear whether there were any occupants into those houses that got swept in the drain.

BJP MP Gautam Gambhir took a potshot at Kejriwal as he shared photos of waterlogged Delhi. Gambhir wrote, “I have heard the Delhi government is running a “Rain Water Harvesting” scheme on Delhi’s roads that have become as good as that of London and Paris. When will we get to see advertisements about this dear Chief Minister?”

Kejriwal, for his part, sought to blame the COVID-19 pandemic as he urged different departments of the Delhi administration to work together. His tweet read, “This year, all agencies, where they were of the Delhi government or the MCD, were busy controlling corona. They faced many difficulties due to corona. This is not the time to blame each other. We will have to discharge our responsibilities collectively. We will try and clear the water wherever there’s waterlogging.”

Kejriwal has lately faced severe condemnation for his tacit hobnobbing with the BJP as he ended his boycott of Arnab Goswami, Times Now and Zee News, three channels that have been accused of promoting hate speech and religious enmity. His government is reported to have splashed crores of rupees in funding these TV channels in the last few weeks. Critics say that Channel owned by Goswami, Zee News and Times Now will only be emboldened to carry out more hate propaganda using the money from the Kejriwal government.

Kejriwal has also faced criticism for buying expensive front page ads in newspapers across India to brag about his exaggerated claims on governance.